A Robot Suited to Underwater and Outer Space 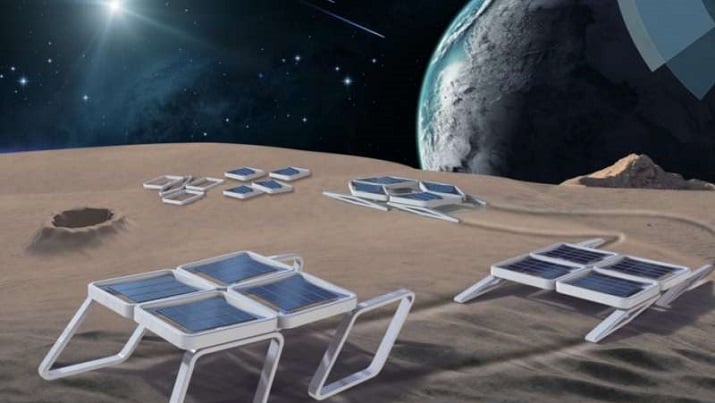 Artist’s conception: DeployBots readying themselves for space exploration. (Credit: Wang et al., (c) 2017 Royal Society of Chemistry)It’s a soft robot, capable of moving itself without motors, or any additional mechanical components. It walks when an electric current is applied. And it’s the first of its kind.

Researchers at Seoul National University and Sungkyunkwan University have developed DeployBot, an easily-deployed device that can be reconfigured into many forms. Applications may include everything from household objects to seabed exploration to space missions.

One of its main advantages, according to research paper co-author Sung-Hoon Ahn, is the robustness afforded by its lack of mechanical systems. The typical problems that would face motor-based robots in water or space environments, such as sealing and lubrication, are eliminated.

Eight modules containing connector magnets make up the robot’s assembly -- four for the body and one for each of the four legs. The modules lie flat when folded, then pop up into roughly a square shape when deployed; both operations are controlled by a shape memory alloy wire running through the square frame of each module.

DeployBot can walk with an undulating gait, similar to the way an inchworm creeps across a surface (in fact, not unlike the inchworm, the robot moves very slowly – a little over two meters per hour). A four-step current sequence is applied to generate an actuation wave from front to back. Forward motion is created by the robot pulling up its back legs while holding its front legs in place, which it does in response to the imbalance in frictional contact with the ground between the two sets of legs.

Underwater, DeployBot can also walk with an ambulating gait, similar to the movement of a four-legged animal. This gait requires the robot to support its entire weight on two legs – something it cannot do on land due to the lifting force required. But that force is reduced as the robot moves along underwater.

Moving forward, the researchers expect that the same techniques could be used to make other types of module shapes, and in turn a wider variety of robot designs and functions. Other methods for moving the robot – e.g., pneumatic actuation, magnetic fields, optical forces -- could also be investigated. The same approach could also be used to fabricate microscale and nanoscale structures, opening a new range of applications.