Video: Watch a Robot Cheetah Mimic the Movements of the Real Thing 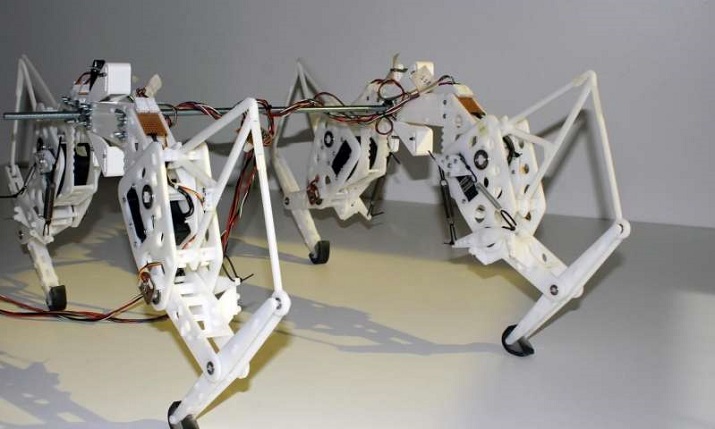 The robot cheetah weighs 2.5 kilograms and 30 centimeters long, or 20 times lighter than a real cheetah and four times smaller. Source: University of TwenteResearchers at the University of Twente in The Netherlands have constructed a scaled-down robotic version of a Cheetah that moves using only about 15 percent more energy than the real deal.

The goal of the robot cheetah is to apply the knowledge learned to the development of new robots that may play important roles in the daily lives of humans in the future and the need for these machines to move effectively in our environment.

“My robot vacuum cleaner, for example, cannot climb stairs or even cope with thresholds,” says Geert Folkertsma, lead researcher on the University of Twente project. “We therefore need to develop robots that can walk, and when it comes to moving around efficiently, there’s a lot we can learn from the cheetah.”

Folkertsma studied video footage of cheetahs and used software to analyze of their movements. From his research, he garnered the bending and extending of a cheetah’s spine is what makes the animal move efficiently, run at top speeds and make large leaps. He says it is the robotic backbone that separates the robot cheetah from existing walking robots.

“The trick was to imitate it without complicating matters unnecessarily: Instead of vertebrae and intervertebral discs, we worked with a cleverly placed spring which delivers approximately the same effect,” Folkertsma says. “Cheetahs are also able to store a lot of energy in their muscles for later use. This too is something we have imitated by fitting carefully selected springs in our robot’s legs.”

Current walking robots tend to be large, heavy and consume vast amounts of energy. The robot cheetah weighs 2.5 kilograms and 30 centimeters long, or 20 times lighter than a real cheetah and four times smaller. The robot cheetah can reach a top speed of about 1 kilometer per hour.

Researchers hope learning more about cheetah movements through robotics, future robots can be developed that walk more elegantly and are more energy efficient. These robots could have future use in areas such as healthcare or housekeeping and the knowledge gained could be used in rehabilitation robots or advanced prosthetics that are equipped with robotics.