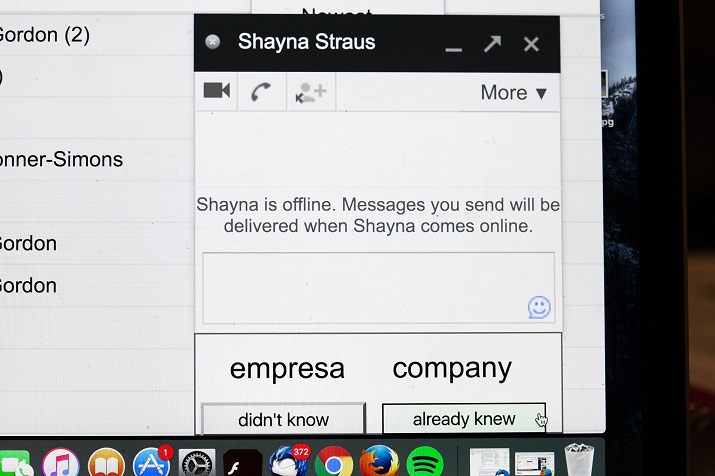 While waiting for someone to instant message a user back, WaitSuite uses this time to teach vocabulary. Image credit: MIT CSAILIdle 'micromoments' are those times when smartphone users wait for an app to update, for WiFi to be connected or for a friend to message you back.

Researchers at MIT’s Computer Science and Artificial Intelligence Laboratory (CSAIL) have developed a series of apps that takes advantage of these countless moments throughout the day to improve your vocabulary.

WaitSuite is a micro-learning app that uses the time a person wouldn’t otherwise be doing anything to help them learn—something researchers call “wait-learning.”

“With stand-alone apps, it can be inconvenient to have to separately open them up to do a learning task,” says MIT PhD student Carrie Cai, who leads the project. “WaitSuite is embedded directly into your existing tasks, so that you can easily learn without leaving what you were already doing.”

WaitSuite teaches you vocabulary during five common daily tasks: Waiting for WiFi to connect, emails to push through, instant messages to be received, an elevator to come or content to load on your phone. Using the app’s instant message app, users learned about four new words per day, or about 57 words in about two weeks, MIT says.

Researchers found that the system actually kept most users on task rather than check social media or otherwise leave the app. The app could also be used for learning other things such as math, medical terms or legal jargon.

Some of the tools include “WiFiLearner” that gives a learning prompt when it detects a user is seeking a WiFi connection and “ElevatorLearner” that detects automatically when a person is near an elevator by sensing Bluetooth iBeacons and sends vocab words to translate.

“The vast majority of people made use of multiple kinds of waiting within WaitSuite,” says Cai. “By enabling wait-learning during diverse waiting scenarios, WaitSuite gave people more opportunities to learn and practice vocabulary words.”

Researchers found that some types of wait-learning were more effective than others depending on how long the micromoment was. The ElevatorLearner time was typically 50 seconds and opening the flashcard app took 10 seconds, leaving free time leftover. For others, doing a flashcard on the app while waiting for WiFi to connect didn’t seem worth it as the WiFi connected quickly.

Future research will involve testing other formats of micro-learning such as audio for on-the-go users or even having the app remind users to practice mindfulness to avoid reaching for the phone during times of impatience, boredom or frustration.