The increased legalization of marijuana and recent research indicating that medicinal marijuana grows particularly well under light-emitting diode (LED) lighting, are shining a brighter and more focused spotlight on LED technology for hydroponic use.

While several types of hydroponic lighting exist, the prevailing wisdom until recently was that LEDs were not appropriate for flowering and fruiting crops, as they did not deliver the light spectrum required by vegetable crops.

Recently, however, a change is afoot and the hydroponics industry is acknowledging increasing LED success. While LEDs are still more costly at least initially, advantages and long-term ROI are becoming impressive.

LED lighting for plant growth is hardly a new concept. NASA seems to have both initiated and paved the way for its use. For example, living in space for a long period is problematic without a food source. NASA has been developing methods for growing crops in space using artificial light sources for decades.

While using artificial light eliminates some challenges, it also requires the use of valuable energy. LEDs, however, allow for greater control, use less power than traditional lamps, and radiate minimal heat. In addition, LEDs last longer than traditional bulbs, are smaller and are lighter in weight.

Early on, NASA partnered with a small business in Wisconsin. Orbital Technologies Corporation used its Biomass Production System aboard STS-110 for a 73-day stay aboard the International Space Station. The company, along with the Kennedy Space Center, developed the High Efficiency Lighting with Integrated Adaptive Control (HELIAC) system, which used solid-state LEDs to efficiently grow plants. 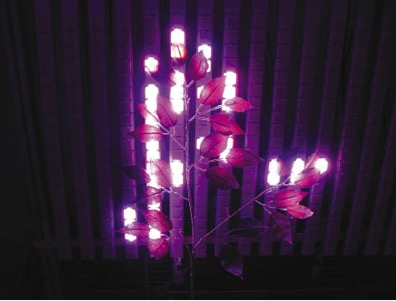 While NASA was studying the use of LEDs, mom and pop growers were turning to other technologies that seemed more appropriate for indoor use.

High-Intensity Discharge (HID) lights have typically been the go-to solution for hydroponics. They are available in bulb, ballast, lighting hood or lighting reflectors. Bulbs are typically metal halide (MH) or high-pressure sodium (HPS). MH bulbs emit wavelengths in the blue/white portion of the spectrum, mimicking the hot summer sun, and are used during a plant’s growth phase. In comparison, HPS bulbs imitate autumn, feature warm orange/red hues, and are used for the plant’s flowering stage. Both solutions are fairly inexpensive, however, they generate a great deal of heat and also require a substantial amount of energy to run.

Fluorescent lights provide a wide angle of light, and emit a cool blue light and low heat levels, conditions ideal for seedling and cutting growth. Compact Fluorescent (CFL) lights are inexpensive to use and feature a small or multiple tubes so that the ballast is integrated into the lighting, making it appropriate for small grow areas or rooms. Fluorescent lighting stimulates growth in young plants, but does not generate sufficient heat for effective lighting beyond the early growth stage.

Sulphur plasma lighting systems are relatively new to hydroponics use, and provide adjustable output that simulates wattage from 100 W to 1300 W. Benefits include energy efficiency, delivery of a full and continuous light spectrum, and they can be used for multiple types of plants and a variety of room sizes. The downside of these systems is cost. 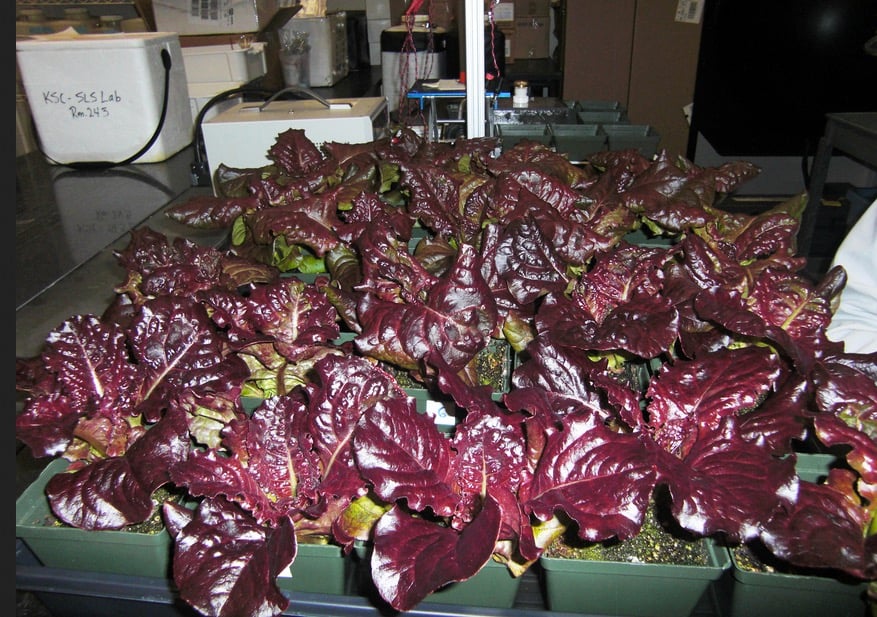 Figure 2. Red leaf lettuce plants were also harvested from a plant growth chamber grown under red and blue LED lights. Photo Credit: NASA/Frank Ochoa-Gonzales LEDs offer two main advantages for hydroponic use: (1) they give off specific wavelengths of light that can be fine-tuned to the plant and its stage of growth; and (2) they use up to 60% less energy than traditional bulbs, and the blue light of LEDs offers greater precision in tuning wavelengths for a plant.

The study in the spring of 2016 looked at conditions of cultivation and how they influence the growth and yield of medicinal cannabis, measuring the quantities of Cannabidiol (CBD) and Tetrahydrocannabinol (THC) produced. CBD is used to treat such diseases as Multiple Sclerosis. THC is used to combat and alleviate medical conditions such as Tourette syndrome and therapy-resistant glaucoma, and such complaints as weight loss, nausea and vomiting. Wageningen also investigated the influence of temperature, moisture, plant nutrients, pests and diseases.

For the study, two light sources were used: SON-T and water-cooled LED units. Crops grown under LED lighting were exposed to two intensities of light—one equal to the SON-T lighting, and one considerably higher. An autumn environment was simulated so that no more than 100 µmol s-1 cm-2 of light could enter the greenhouse, and “days” were appropriately long for four weeks and then shorter in daylight hours until harvesting.

Expectations are that the use of LEDs for hydroponics is a trend that will continue, especially as their cost comes down. Whether to grow medical marijuana or vegetables for family use, LEDs offer a sufficient number of benefits to seriously consider their use.