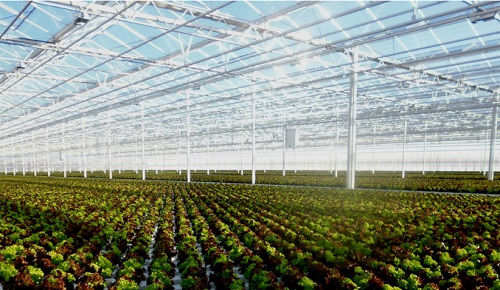 Desmet started producing hydroponic lettuce in 2004 and, in 2015, installed 2,610 LED lights to boost light levels beyond what could be achieved with traditional high-pressure sodium (SON-T) lamps. This year, the company will expand its available cultivation area by 20,000 square meters and will once again be using LED lighting; however, it will use only 1,680 of Plessey’s Hyperion grow lights to provide the same light level.

The goal is to use the lighting to get the largest yield of the highest quality lettuce from every square meter of growing space. Desmet has also invested in automated production, including a combined heat and power (CHP) system as well as the LED lighting. Because the LEDs give off much less heat than SON-T lamps and are 40 percent more energy efficient, the LEDs allow for an increased light level of 80 micromoles per square meter resulting in denser, more compact crops with better color.

Fewer fixtures in the greenhouse also means less shade in the facility, maximizing the amount of light that is given to the crops.

“With an output of 1,000 micromoles, the Hyperion only needs to be installed on the trellis to provide good uniformity, just like SON-T,” says Jonathan Barton, director of grow lighting at Plessey. “Moreover, it is a very simple, durable and cost effective design with a long guarantee, making it ideal for Desmet’s requirements.”