Researchers from Ecole Polytechnique Fédérale de Lausanne in Switzerland have developed an exoskeleton that allows people with paraplegia to stand up, walk and even climb steps.

The prototype will be demonstrated at the 2016 Cybathlon, the sports competition for disabled athletes who use assistive technologies.

While standing, walking, and climbing steps seem like everyday movements, for people with paraplegia, they can be impossible.

The new exoskeleton called TWIICE aims to change that. The walking assist device that was developed entirely at EPFL’s Robotic Systems Laboratory (LSRO).

One of its main advantages is that it’s lightweight, at only 30 lbs., allowing it to become one with the user.

The hip and knee joints of the exoskeleton are flexed and extended by two electric motors per leg, and the device can maintain a charge for three hours.

“Our goal is to make the vertical world accessible to handicapped people,” said Mohamed Bouri, a group leader at the LSRO and the project supervisor. “In several years, it will undoubtedly be common to see people in exoskeletons standing up and walking around outside or in stores.”

While TWICE is not yet ready to hit the market for use by the general public, the team believes its prototype is both safe and operational enough for testing and for use in a competition. 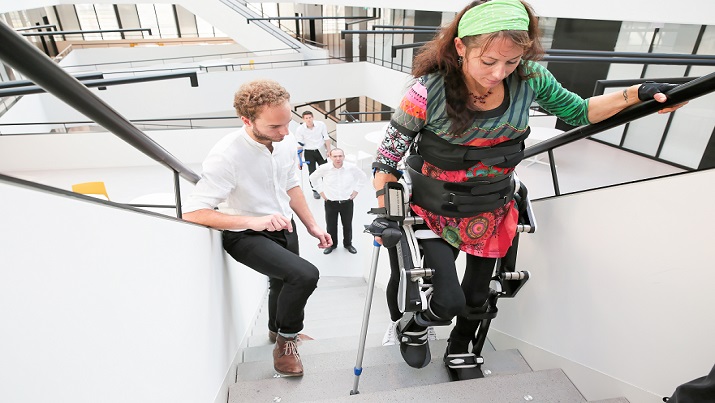 “At this point, the pilot needs a lot of strength, stability and concentration to handle it, since each step is controlled manually,” said Jemina Fasola, a PhD student in bioengineering.

An expert named Silke Pan,a former acrobat who was left paraplegic following a trapeze accident, will pilot the device in the upcoming competition.

In the future, the researchers will work to make the exoskeleton even lighter, more ergonomic and easier to control. The team anticipates incorporating built-in walking programs so that users won’t have to control every step and so that the motions will become more fluid and natural.

“We came up with a very flexible production method,” said Tristan Vouga, a PhD student in microengineering and the person behind the concept. “It makes it easy to produce exoskeletons that can fit different body types and work with different handicaps.”