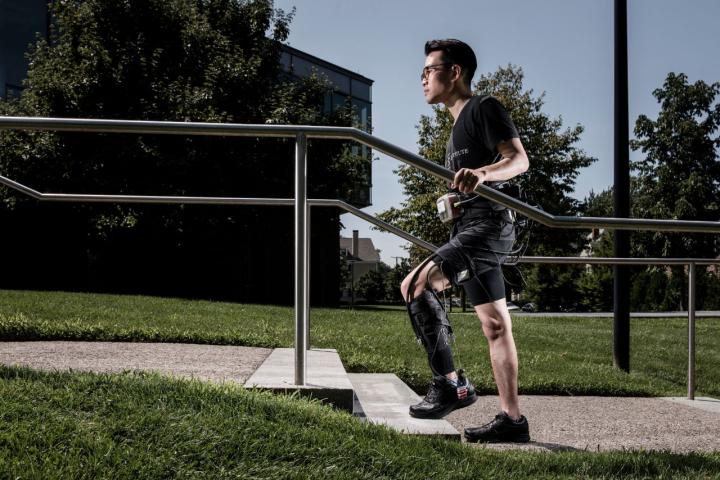 The soft robotic exosuit (shown here from the side) was worn by stroke patients on the hemiparetic side of their bodies. By assisting during the stance and swing phases of their gait cycles, it enabled them to walk faster and farther on a 30-meter walkway. Source: Rolex Awards/Fred Merz

Robotic exoskeletons have considered for the rehabilitation of stroke patients for years. There are a range of devices that enable people to walk again, but there needs to be more done to understand how to use wearables for stroke patients. Recent clinical guidelines have recommended against the use of robotic therapies when the goal is to improve speed and distance. But the team has proved that their new device could be useful.

The team created an existing ankle assisting soft robotic exosuit that could improve biomechanical gait functions in stroke patients in 2017. The device was tethered to an external battery and motor and was tested by study participants while walking on a treadmill. Since then, the team has taken a big step forward in using this technology in the rehabilitation of stroke patients.

The updated version of the suit is untethered and carries its own battery and motor, which are worn on the user’s hips. The exosuit weighs less than five kilograms and targets the limbs of stroke survivors during the gait cycle. It delivers mechanical power to the ankles through a cable-based mechanism. The cables and other parts are anchored to the body with lightweight and functional textiles. Patients only have to wear the exosuits on the impaired paretic side. It was designed to work with plantar flexion, and ankle movement that pushes the foot down into the ground during the stance phase of the gait cycle, and dorsiflexion, where the foot is lifted up and toes pulled toward shin during the swing phase. Both of these movements are typically impaired in post-stroke hemiparetic walking.

The team tested the device with six post-stroke survivors with hemiparesis, varying severities and impairments who have entered the chronic phase. They performed a series of tests on a 30-meter walkway. Wearing the exosuit unpowered didn’t effect walking speeds, distance or energy costs compared to not wearing the suit. When the exosuit was on, the team saw immediate results.

All six participants showed improvements when walking with the device. Walking speed was increased by an average of 0.14 meters per second. One individual improved their walking speed by .28 meters per second. They were also able to go 32 meters farther on average in six minutes. One person traveled over 100 meters further. Faster and farther walking after physical therapy is among one of the most important outcomes in stroke recovery.

Next, the team wants to refine the technology and study the immediate impact in stroke survivors with a range of walking abilities. They also want to explore therapeutic application in clinical and day to day walking.

A paper on this technology was published in IEEE Open Journal of Engineering in Medicine and Biology.