Back to the Future: Sony Turntable Connects to Digital Audio Systems 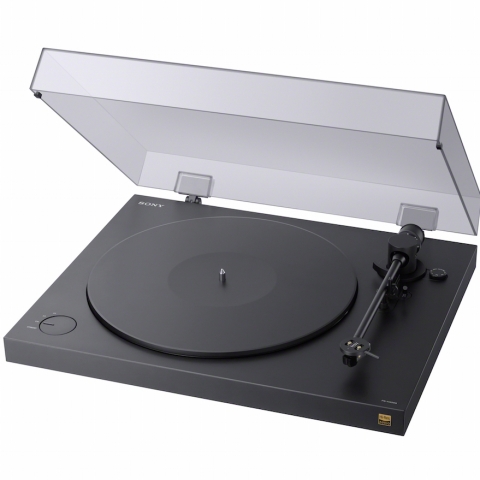 Sony’s CES introduction of its HX500 turntable should have been accompanied by the Peter Allen song “Everything Old is New Again.” Aimed as a bridge that connects the growing number of vinyl record collectors (music industry sources estimate over 8 million vinyl records were sold last year) to the convenience and sound quality afforded by digital audio, the new turntable doesn’t at first glance present many physical differences between it and other fully featured contemporary record players. Indeed, if your interest is solely in something to play LPs it'll do that nicely. But Sony launched the new turntable at CES because under the surface it has a digital twist: a built-in analog-to-digital (A/D) converter that supports hi-res digital transfers in either native Direct Digital Stream (DSD, up to 5.6 MHz) or WAV files (up to 192 KHz/24-bit resolution). This enables users to digitally store their favorite music from vinyl recordings and play them for personal use on virtually any compatible Hi-Res Audio device.

All of this can be done via a USB connection to a PC or Mac. The HX500 also comes with a newly developed app with software that allows simple and intuitive editing on your computer. Users can conveniently combine tracks from both sides of an album or multiple tracks can be split and saved. A special driver is also provided for recording compatible DSD streams.

To address the need for stereo balance Sony developed a straight tone arm designed with the stylus located in the central axis of the arm. An integrated lightweight, low resonance head shell comes complete with moving magnet cartridge and produces, according to the company, a “three-dimensional sound while ensuring optimum tracking, even on warped records.”

A two-speed belt drive system is also used which includes an aluminum die cast platter and thick rubber mat to help stabilize disc rotation and minimize vibration. The built-in phono equalizer incorporates parts mounted on a glass epoxy circuit board to improve structural rigidity. A high density acoustically inert cabinet is utilized along with insulator feet to offset vibration and reduce resonance. Showing that Sony is conscious of the need to tackle the kind of small details audiophiles insist on, even the dust cover is designed to minimize vibration. The Sony turntable will be available for sale to the general public later this spring.