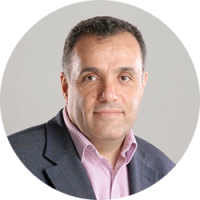 Electronics360: Can you tell me a little bit about yourself? Do you come from a technical background?

Zeine: I was introduced to technology at age 10, where I learned to program in low-level machine language and to design digital electronic circuits. By the time I went to college, I had amassed extensive knowledge of computer science. I decided to stay with physics to avoid redoing stuff I already know in CS class. I have had massive interest to keep my knowledge relevant and current in physics, programming and electronics while I had my first startup.

Electronics360: What prompted you to pursue a career in technology?

Zeine:How the world works is very fascinating to me, I have also had two elders who studied engineering, since I had access to their university books as a teenager, I learned mostly from books.

Electronics360: Where did the idea for Cota come from? Was this something you’ve always thought about?

Zeine:I have a passion for electro-magnetic EM waves (all waves in general), but EM waves have fascinating results and I have thought about how to use their non-linear properties for years after college. While investigating methods of focusing data communication signals, I discovered that such techniques can focus the signals, avoiding absorptive materials and deliver significant power to the receiver device.

Electronics360: Can you tell me about the technology behind the device? How does it work?

Zeine:The technology depends on a very important property of electro-magnetic waves; signals that can go from A to B, can go from B to A in exactly the same path backwards. When a device is communicating with a Cota power transmitter, it is given an instruction to “illuminate” the environment with what we call a beacon signal; this low power wifi-type beacon signal travels in all directions from the device ending at the transmitter after potentially bouncing off the environment to reach it. The Cota transmitter at that instance was ready to take a snapshot of every path the beacon took to reach it and then it would send the signal back to the device using every path. All this is repeated 100 times per second, so the device receives power continuously even if it moves. 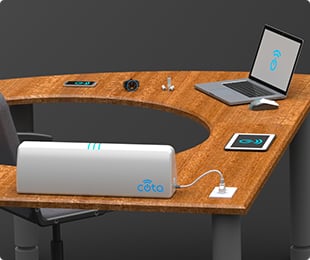 This method has the net effect of not taking blocked paths since the signal would not travel thorough a blocked path between the receiver and transmitter; these blocked paths include pats blocked by people. This is the only technology that can deliver power at a distance with the need for line-of-sight between transmitter and device to be clear.

Of course the receiver device has a Cota receiver Integrated Circuit (IC) that receives the power and delivers it to the local device and its battery.

Another advantage is that this method guarantees highest possible signal efficiency in transmission and reception, making it the best means of delivering wireless power.

Electronics360: What is the most challenging aspect of designing a tech product?

Zeine:There are a lot of teams building amazing quality products. The real challenge is implementing differentiating solutions that are meaningful to the end users. Our team has worked very hard at making sure that the differentiating features of Cota take front and center in the implementation to serve our users in the best possible way.

Electronics360: What does the future of Cota look like to you? How can your product evolve and expand?

Zeine:We foresee that the Cota technology will not only impact how we design electronic devices in the future, but it also will impact how we live our lives. With the advent of machines in every object in our environment, we will live in a digital world without logging onto the internet. This change will mean our world will soon be light years ahead in health, safety, productivity and entertainment. We believe true wireless power is a critical and core enabler of future technologies that have yet to be dreamed of.

Electronics360: What is your personal vision for the wireless electronics market?

Zeine: After 15 years of working on wireless power, I believe that the electronics market is about to see rapid development from an innovation perspective where many new disciplines are impacting the design and function of the devices that have not been seen before. I believe that wireless power will be a core technology to brining these solutions to the market.

Electronics360: In your opinion, what is the biggest hurdle electronics today face?

Zeine:I am fully convinced that power is the final hurdle in creating new devices. Batteries, on their own, have served us for 180 years. It is time to move the power story from the 19th century to the 21st century.

Electronics360: Are you working on developing any other products at this time?

Zeine: I think the future stuff we are working on will amaze you.