Imagine never again having to bother plugging your smartphone in to recharge at night. That capability already exists in Qi inductive charging. But this is limited to distances of only a few inches, requiring devices equipped with the technology to be set down on a charging pad. A new system known as Cota® can safely deliver targeted power to devices at longer distances up to 30 ft (9 m) without cables.

Cota, by Ossia Inc., delivers energy wirelessly using radio frequency (RF) technology similar to Wi-Fi. It sends a directed power-carrying RF signal that does not require line of sight to gadgets that can be in motion. It does not interfere with other wireless technologies and can power a variety of devices such as smartphones, wearables, sensors, internet of things (IoT) devices and batteries.

Cota works by establishing paths between receivers and transmitters with beacon signals and then beaming power-carrying RF signals along those routes. Source: Ossia, Inc.

The Cota system consists of two main components: a tiny silicon chip receiver and a larger transmitter. The Cota receiver establishes routes to the transmitter by sending it beacon signals at a rate of a hundred per second. These signals can bounce off walls and objects but are blocked by living organisms such as people.

The Cota transmitter contains thousands of small antennas that each receive the beacon signals at slightly different angles. Calculating the variance between those angles allows the transmitter to establish the receiver’s exact location and the path back to it, along which an RF signal carrying power is safely beamed.

Ossia unveiled the technology at CES 2016. Since then, the company has made progress miniaturizing the transmitters. They are now available as panels called Cota Tiles that can be mounted discreetly on a wall or ceiling, with a charging range of up to 30 ft (9 m).

The next iteration of the technology was announced during CES 2018. With reduced AC input power requirements, from 450 W to 140 W, the Next-Gen Cota Tile improves efficiency by 70 percent. It also delivers 10 percent more power to receivers with the same number of antennas, while cutting weight by 40 percent and cost by 25 percent.

Ossia hopes to get its technology into consumers’ hands as soon as possible. At CES Unveiled last November, it debuted the Cota Forever Battery™, the world’s first wirelessly powered replacement for disposable and rechargeable batteries. With the same form factor and footprint as regular AA batteries, Forever Batteries contain Cota RF receiver chips for wireless recharging. By retrofitting gadgets that run on the traditional type of power storage, including IoT devices like thermostats, security systems and leak detectors, Ossia hopes to build confidence in its wireless technology. Ultimately, the company wants to assist manufacturers in building Cota chips directly into every device that needs power. 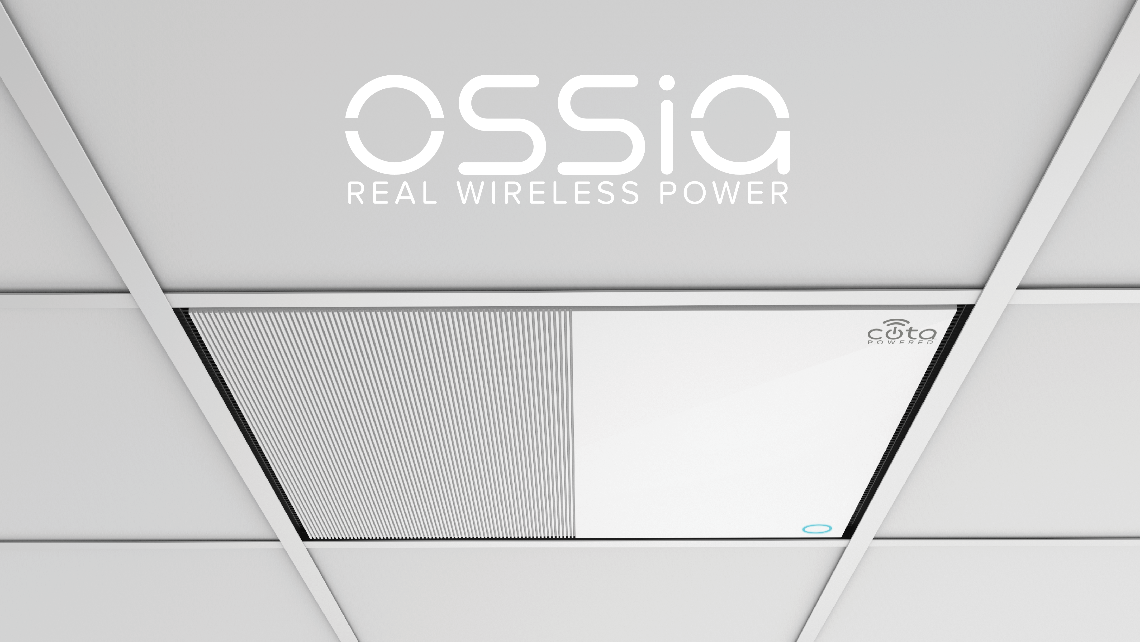 Transmitters can be hidden discreetly in the ceiling as Cota Tiles. Source: Ossia Inc.

"Forever Battery bridges the gap between the battery-wire age and the wireless power era," said Mario Obeidat, CEO at Ossia. "When people see how Cota Real Wireless Power can be implemented in a AA battery, they will start to see the vision of Cota everywhere. The Forever Battery will create awareness of Cota and provide confidence that devices will be powered when it matters."

Ossia is also looking to move its technology into vehicles. A joint venture announced during CES 2018 between Ossia and Motherson Innovations, a subsidiary of SMRPBV, seeks to integrate Cota wireless power technology into passenger, commercial and public transportation vehicles. The joint venture aims to develop solutions that deliver power wirelessly to occupants’ personal devices, as well as to various sensors in and around the vehicle such as brake sensors, key fobs and tire pressure gauges. It hopes to have its systems deployed in private and public vehicles by 2021.

"Our customers want access to the most advanced technologies available today," said Vaaman Sehgal, Vice Chairman of Motherson, in a press release. "After extensive evaluation of multiple wireless power companies, we have chosen Ossia as our preferred partner and are investing to be a part of the broader Cota ecosystem. Wirelessly powering the in-cabin experience and various other sensors is a tremendous technological advancement for both vehicle manufacturers and consumers."