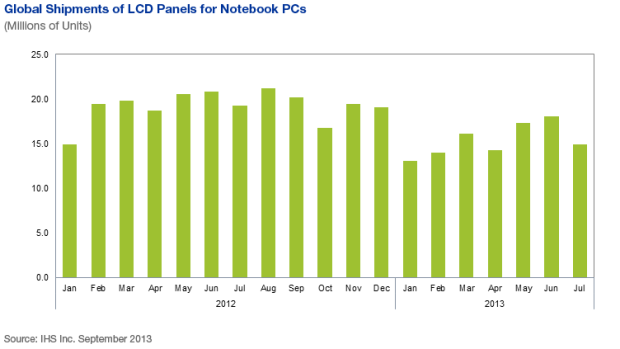 "Notebook brands during the third quarter typically increase their purchases of LCD panels as they prepare to launch new mobile PC models for the second half of the year," said Ricky Park, senior manager for large-area displays at HIS, in a statement. "However, many key brands this year have accumulated large panel inventory surpluses because of weak sales in the first half. This has caused them to reduce purchases in July, leading to major declines in notebook PC panel market shipments both on a sequential and an annual basis."

Apple raised its shipments on an annual basis to meet MacBook Air demand, according to IHS.

The mobile PC industry is currently facing tough competition from media tablets, along with a dearth of innovation that would compel consumers to buy new systems, IHS said.

IHS forecasts that total notebook panel purchasing returned to sequential growth in August with a 10 percent increase. But the August total is expected to be down by 23 percent compared to August 2012, the firm said.