While 8K ultra-high definition (UHD) resolution television unit shipments have yet to begin commercial volume roll out, shipments will steadily increase over the next five years reaching nearly 1 million units by 2019, according to a new report from IHS.

8K UHD TVs offer a resolution of 7680 x 4320 pixels and are forecast to reach 2,700 units shipped worldwide this year. However, with the advent of 8K broadcasting in Japan beginning in preparation for the 2020 Olympics, IHS forecasts this will spur a new round of TV purchases resulting in a rise of units to 911,000 by 2019. However, this rise is dependent upon the 65-inch screen size—the highest volume in production—which will account for nearly 80% of 8K TV shipments in 2019. 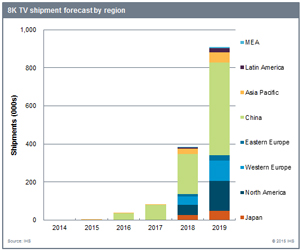 According to Paul Gray, principal analyst for IHS, the biggest inhibitor to the growth of 8K TVs is consumer screen size preferences. “8K requires a very large screen or the higher resolution becomes invisible at normal viewing distances,” Gray says. “The average screen size in the TV market has grown by an inch each year over the past decade, but it is still a long haul before sizes over 70 inches become commonplace.”

A boost in 8K unit shipments will also be helped by new liquid crystal display (LCD) fabs to come online in China in the next three years. IHS says this will increase the capacity to make 65-inch 8K TV displays dramatically. Chinese consumers have also proven to adopt new TV technologies early as evidenced by the recent uptake of 4K UHD resolution in the country, IHS says.

“We can be confident that a combination of enhanced local panel production and consumers
eager for the latest technology will make China the driving factor in 8K television growth,” Gray says.