The global market for gesture sensing control user interfaces is set to grow 10% this year thanks to growth in emerging applications such as virtual reality games, smartwatches, smart TVs and other consumer electronics, according to a new report from IHS. 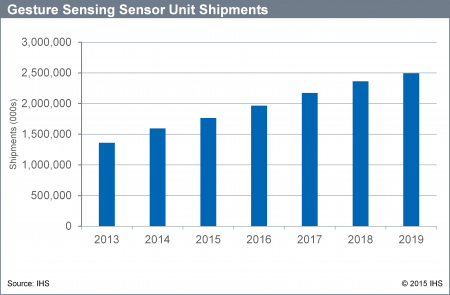 “Gesture sensing control will not compete with touch screens, but will instead be complementary, because each technology is appropriate for specific applications,” says Calvin Hsieh, director for touch and user interfaces for IHS. Hsieh uses smart TVs as an example where touch screens will not work because the TV is too far from viewers. However, with gesture sensing control it works because it provides another layer of immersive reality or even virtual reality.

“Mainstream consumers have been aware of gesture sensing control, since the debut of the Nintendo Wii in 2006,” he says. “Now almost a decade

Calvin Hsieh, director for touch and user interfaces for IHSlater, gesture sensing control is poised to become the second most common user interface for smart devices after touch screens.” He cautions, however, that it will take time to develop apps that rely on gesture sensing and change consumer’s touchscreen centric behaviors.