Technology innovation and contract research firm Cambridge Consultants Ltd. has developed what it claims is the world's first fully digital radio transmitter —a technology that could be a key enabler of the Internet of Things (IoT) and 5G communications.

While software-defined radio (SDR) makes use of digital control of analog radio frequency (RF) signals, Cambridge Consultants' technology uses digital logic to create a high-frequency bit stream sent directly to an antenna, with no conventional radio parts or digital-to-analog converter. This is expected to enable innovations in the use of spectrum as well as increasing the flexibility of system architectures and reducing cost.

The system, codenamed Pizzicato, makes use of 1-bit delta-sigma modulation to encode information as a high-frequency bit stream with noise pushed into higher and lower frequency bands. This is then band-pass filtered and sent directly to the antenna. The process is analogous to the process of reading a high-frequency bit stream from an audio CD and filtering it down to output, an analog signal to drive audio speakers, Monty Barlow, director of wireless technology at Cambridge Consultants, told Electronics 360. 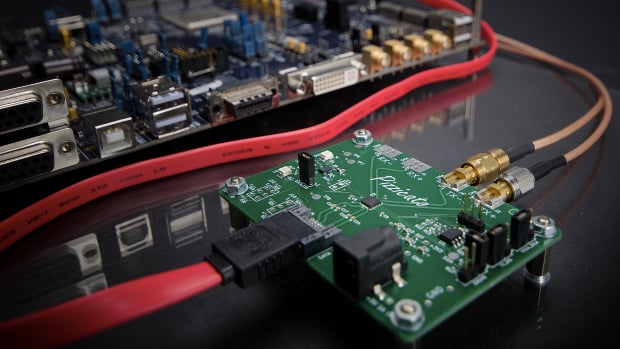 All-digital radio on an FPGA board. Source: Cambridge Consultants Ltd.Pizzicato is a radio transmitter made using just a Xilinx Virtex 5 field programmable gate array (FPGA) containing programmable logic and a SerDes, which is then connected to an antenna. The key breakthrough was working out how to drive the SerDes so that when the output is band-pass filtered, it produces the appropriate radio signal, including the artifacts of the necessary modulation, to be detected by a conventional radio receiver. "The output is classical analog radio—but cleaner. A receiver can't tell whether it is picking up a conventional signal or Pizzicato," said Barlow.

The use of the analog band pass filter—the only deviation from digital design—is not absolutely necessary, but it is a good practice as it removes the unwanted noise above and below the pass frequency that it would be wasteful of energy to broadcast as well as being anti-social as a source of interference to other spectrum users.

In a demonstration given at the Mobile World Congress in Barcelona in March, the bit stream was operated at 3 gigabit(Gbits) per second using the serializer on the Xilinx FPGA. This produced about 100 megahertz (MHz) of usable bandwidth and for convenience, the team modulated the signal on a 900MHz global system for mobile communications (GSM) cellular communications carrier frequency. This was chosen mainly because the GSM test receiver kit is readily available, Barlow said.

"It's been known to be possible for a while. But one of the things we did was to use off-the-shelf components. We used the serializer present within the SerDes to generate the bit stream. However, the breakthrough was finding how to break down the delta-sigma computation so it could be decomposed into multiple tasks that could be solved in parallel and reassembled with minimal noise in the composite stream," said Barlow. "As a result, none of the logic (in the FPGA) needs to run faster than 100MHz clock frequency," he added. 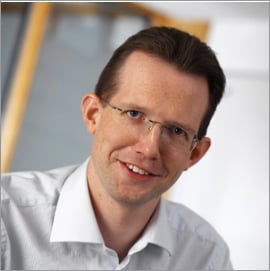 Monty Barlow, director of wireless technology at Cambridge Consultants Ltd."Our first trial of the technology has created 14 simultaneous cellular base station signals," said Barlow, in a statement. "But it is the potential which is so exciting. Like mainstream microprocessing, a Pizzicato-based radio would directly benefit from Moore’s Law—shrinking in cost, size and power consumption with each new generation of silicon fabrication."

He added, "The advantage is not so much in what we transmit but in the low-cost and flexibility of the hardware. It allows fast hopping and this could be a benefit for spectrum scavenging, something that is talked about for IoT and 5G."

“It could also be programmed to generate almost any combination of signals at any carrier frequencies, nimbly adapting its behavior in a way that is impossible in conventional radios. It is early days for this technology but we believe radio design has reached a turning point.”

SDRs have provided a tenfold improvement in the data rate that can be squeezed into a radio channel, but further improvement is needed for mobile broadband and IoT, according to Cambridge Consultants. Moreover, radio spectrum is a limited resource with only frequencies below about 1 gigahertz (GHz) propagating well over distances and through walls. The way around that could be "cognitive wireless" techniques that sense the radio, the environment and switch parameters including frequency on the fly.

Cambridge Consultants claims that such techniques could provide access to more of the estimated 90% of allocated spectrum that is not in use at any one time andPizzicato digital radio could be a way to enable that.

Similarly, making use of frequencies at 10GHz and beyond is expected to require techniques such as meshing and beamforming to get around the inherently poor range. Again, digital radio could be a lower cost and more scalable enabler than analog radio.

"Crowding 50 analog radios together on one chip, switching their operational parameters every few microseconds and expecting them to work at 60GHz is an analog designer's nightmare," said Barlow. "With Pizzicato, we have created a glimpse of future disruptive technology—a radio built purely from computing power."

Barlow said he could not comment on whether the work on digital radio would result in a startup company spinning out of Cambridge Consultants. This is a route the consultancy has gone before with the creation of Cambridge Silicon Radio in 1998 to capitalize on early work on 2.4GHz radios in complementary metal-oxide semiconductor (CMOS) used for Bluetooth communications.

"Right now we are testing out our assumptions about the scalability of the Pizzicato approach and moving up in frequency. We are also working on receiver architectures,” Barlow said. “Can you build a digital receiver? Yes! We are working on that although it is an order of magnitude more difficult. We're getting there."

In addition, Cambridge Consultants is filing patents as well as holding commercial discussions over potential partnerships and collaborations.

With regard to scalability, Barlow said that the 28Gbit per second SerDes are readily available with 50 and 100Gbit/s SerDes around the corner. These could open up large amounts of bandwidth as well as allowing easy implementation of wide and narrowband implementations, he said.

"Pizzicato only depends on logic that scales easily and is very flexible. You could do a quick and dirty radio that only does QAM (quadrature amplitude modulation) or a highly sophisticated design that supports multiple modulations and you could alternate between different architectures," said Barlow. Most importantly this could change who gets to make radios and how they are included in system chips, Barlow concluded.