Raspberry Pi, the credit card sized computer board that launched in February 2012, has been improved with a quad-core processor and additional memory resources in the same physical and general resource footprint as the original.

In addition Microsoft is working to port the Windows 10 operating system to the ARM-based single-board computer, according to an executive from the Raspberry Pi Foundation, the charity founded in 2009 to promote the study of computer science in schools, that has developed the board. Until now the Pi-1 has been mainly used to run Linux and related operating systems.

The original Raspberry Pi was based on the BCM2835, a Broadcom SoC that included an ARM1176JZF processor core capable of running at clock frequency of up to 700MHz. It came with 256Mbytes of DRAM later doubled to 512Mbytes. More than 4.5 million units of first generation Raspberry Pi boards have been sold since the launch, the Foundation said. 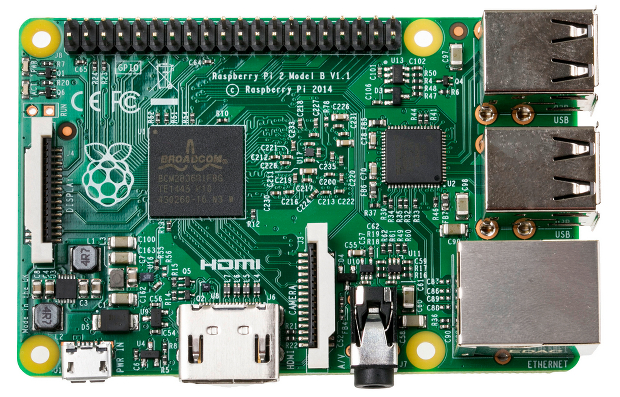 The Raspberry Pi 2 now incorporates the BCM2836, an application processor, containing a quad-core Cortex-A7 running at 800MHz and comes with 1Gbyte of DRAM. This improves the performance obtainable from the Raspberry Pi 2 up to more than six times more than the first generation Raspberry Pi Model B+.

The Raspberry Pi Foundation has made sure that the Raspberry Pi 2 has the same form and fit as the previous Raspberry Pi B+, but with an additional ARMv7 kernel, so that developers and the maker community can swap old and new boards over and applications should run but enjoy the increase in performance. The board layout, multimedia subsystem and peripherals remain fully compatible including the use of the 40-pin GPIO connector, four USB ports and an efficient switching power supply.

"The BCM2836 is the same as the BCM2835, same GPU, same video processor, but with a quad-core Cortex-A7 instead of the previous single core," said James Adams, director of hardware engineering at Raspberry Pi Foundation. "And we've been able to keep it within the same price of $35 plus local taxes."

"Microsoft is porting Windows 10 to the Raspberry Pi 2," said Gordon Hollingsworth, director of software engineering at the Raspberry Pi Foundation. He added that the Pi-2 runs about the same performance as the B+ at low load but can take on heavier-duty tasks. "It will consume a bit more power [than B+] but it is within the same power envelope of 5V at 2A. That additional performance headroom opens up a number of new applications such as software-design radio, computer vision and sound synthesis for musical instruments.

Electrocomponents plc and Premier Farnell plc are two distribution companies that sell the Raspberry Pi 2. Electrocomponents does so through their RS Components, Allied Electronics subsidiaries and Farnell though its Element14 brand.

The board is available to order although waiting times for shipments were not provided.

"The first generation Raspberry Pi platform has been widely adopted by many users in academic and consumer circles, and has also found use in industrial applications, where RS and Allied have played a very important role," said Eben Upton, founder and trustee of Raspberry Pi, in a statement. "The company’s DesignSpark community and the extensive range of free DesignSpark product design tools are connecting students, users and engineers from many domains around the world."