Among the automotive chip market, semiconductors in hybrid electric vehicles, telematics and connectivity and advanced driver assistance systems (ADAS) are the fastest growing with a forecasted compound annual growth rate (CAGR) of 20 percent, 19 percent and 18 percent, respectively, for the 2013-2108 time period.

IHS points to several growth drivers as a reason for increased chip content in vehicles including emission regulations upping the rates of chip content in powertrain applications, safety mandates leading to wider spread adoption of ADAS technology and strong demand from consumers for increased infotainment options.

Ahad Buksh, analyst for automotive semiconductors at IHS, said in a statement that advanced sensors are being added to vehicles in order to control emissions and exhaust aftertreatment systems. He added as an example that a hybrid vehicle demands “ten times more semiconductor content in powertrain.”

Another interesting trend in automotive semiconductors is in the realm of telematics and broadband technology. IHS forecasts that 4G will continue to grow in 2015 in vehicles as well as the trend of converting the instrument cluster from analog to digital. Premium OEMs are going for a digital approach for their high-end vehicles, however, IHS said digital instrument clusters could be an option in all vehicles at some point.

According to IHS’ Competitive Landscaping Tool (CLT) for automotive, Infineon, which had been lagging behind Renesas in 2013, overtook the company as the leader in automotive semiconductors in 2014 with a strong presence in powertrain, chassis and safety and body and convenience domains. The rise of electric vehicles and hybrid vehicles helped Infineon’s business in power management solutions for cars, IHS said. 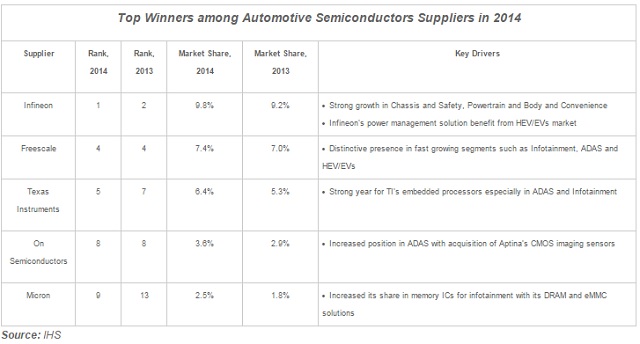 Infineon took the No. 1 spot in automotive chip suppliers in 2014, according to IHS.