If Intel provides the application processor for a 2015 version of the Google Glass electronic spectacles and head-up display – as the World Street Journal reports it will – it will provide a high-profile recommendation – and test – of Intel processors' suitability for use in wearable and mobile equipment.

It will also contribute to the Intel versus ARM contest as an Intel chip will have displaced one based on the ARM architecture and it seems unlikely that Google – which has more money than it knows what to do with – would be susceptible to being paid to take an Intel processor to the detriment of the GoogleGlass performance (but see below).

And if Intel is successful it should lay to rest the simplistic view that Intel processors = performance and high power consumption and that processors based on ARM are more energy efficient albeit at lower performance.

The chip in the first round of Google Glass wearable is the OMAP4430, which is really a mobile phone application processor that includes dual-core Cortex-A9, Cortex-M3, GPU, IVA video accelerator and DSP. The Cortex-A9 operates at four frequencies: 300, 600 and 800MHz, and 1GHz.

But notwithstanding the WSJ article it does seem unlikely that Intel with relatively little success in system-on-chips (SiCs) or mobile phone platforms could have done better than say a Qualcomm or a MediaTek in optimizing chips and software for the confined space of the Google Glass form factor. 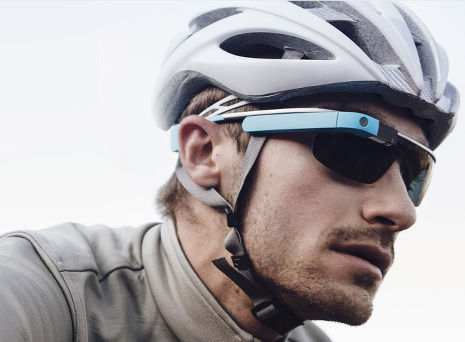 Can Google Glass go from bike to bedside manner?

And the GoogleGlass could do with some optimization because according to research from Rice University the current version runs too hot for sustained use (see Google Glass Said to Run Too Hot). It is available to the general public in the United States for $1,500 or in the UK for £1,000.

There appears to be plenty of bill of materials (BOM) headroom therefore to take an Intel processor, or it could even be the case that Intel is prepared to bomb the processor price and this might fit with Google plans to drop the price of the GoogleGlass in 2015.

But what processor would Intel bring to Google?

Since Brian Kzranich took over as CEO of Intel he has pushed the company towards the wearables and IoT market in an attempt to fight ARM on a level playing field. The obvious chip candidate would be the Quark core. In January 2014, at the Consumer Electronics Show in Las Vegas, Kzranich announced a 22nm FinFET processor for wearables that comprised two Quark cores and housed on an SD-format card called Edison.

Within the dual-core processor one core was configured as a microcontroller and the other as a "heavy-lifting" processor as means of minimizing power consumption. This imitates the big-little architecture that has been pioneered by Intel's rival, ARM Holdings plc. The microcontroller manages I/O and other baseline functions while the x86 processor brings the ability to run Linux and other operating systems and run high-level applications.

Kzranich said that Quark devices would consume about one tenth of the power of Atom processors. Atom was the processor line that has been aimed the tablet computer and smartphone application.

Of course it is possible – although unlikely – that Intel could get a design win in GoogleGlass with ARM. The XMM6321 – jointly developed by Intel and Rockchip – covers the XG632 chip, an ARM-based application processor that integrates Intel's 2G/3G modem, and the AG620, which is an Intel/Infineon chip that provides communications, RF, analog and power management functions. The XG632 is thought to contain a dual-core Cortex-A5 processor.

In general the SoFIA range is thought to be migrating to Atom processors and will be developed, with Rockchips help specifically for mobile, rather than wearable, equipment.

Which leaves us with Intel Edison/Quark. But before we start heaping the kudos on Intel for pushing back the tide of ARM there is one more thought.

One of the most telling aspects of the Google Glass deal could be that Intel plans to promote the device in professional applications such as hospitals and develop new workplace applications for the Glass, as the Wall Street Journal reported. Google may like the idea of getting Intel support in software for professional applications and a commitment to make it work to buoy Intel's own wearable credentials as well as chip sales.

And so we should not rule out the bundled sale, something that Intel has employed in the past. In this case it would be along the lines of:

"Dear Google, You know the processor architecture doesn't make that much difference to power consumption, it's all about the software and how well written it is. So put Intel inside and you get all these hundreds of software programmers just waiting to take Google Glass into loads and loads of professional applications. We can sort out the unit price for processors and payments for software services rendered, later. Best regards, Intel"

Google is generally fairly processor agnostic and might be susceptible to such an argument.

What remains to be seen is whether a future revision of Google Glass will indeed have Intel Inside and whether it will run cool enough for sustained use by both consumers and professionals. And whether they will gain enough utility from the system to make up for the nerdy look.