If you use Google Glass for a video chat conversation you could damage yourself where it touches your head because it gets hot as a by-product of the processing activity, according to a paper from researchers at Rice University (Houston, Texas).

The paper, presented earlier this summer, argues that Google Glass is not suited for sustained use.

The research team did a series of experiments with the Explorer Edition of Google Glass (XE12) and has reported on which applications and functions drain the battery of the Google Glass fastest and therefore raise the surface temperature most. The paper Draining our Glass: An Energy and Heat Characterization of Google Glass was presented at the Asia-Pacific Workshop on Systems held in Beijing, China, June 25 and 26. 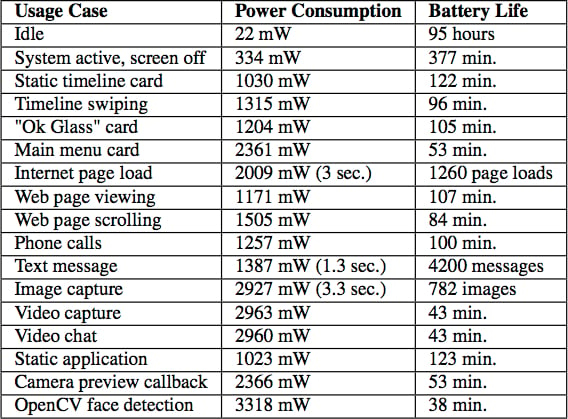 The authors describe how they measured the temperature of the Glass where is makes contact with the wearer's temple which also happens to be the hottest part of Glass as it is where the OMAP4430 SoC is situated. The OMAP4430 includes dual-core Cortex-A9, Cortex-M3, GPU, IVA video accelerator and DSP. The Cortex-A9 operates at four frequencies: 300, 600 and 800MHz, and 1GHz. However, at raised temperatures Glass firmware limits the Cortex-A9 frequency to 600MHz or 300MHz.

Despite this, when running video chat in a room held at 23 degrees C the researchers observed that the surface temperature of the Glass rose above 40 degrees within 150 seconds and above 50 degrees within ten minutes. With a static idle application the temperature rose to a stable 35.2 degrees C. (see figure).

The authors make the point that their measurements were made with the Glass surface exposed to air. In a practical situation where Glass is being worn on the face and in direct sunlight and at higher ambient temperatures the surface temperature of the device will become even hotter.

They state that continuous contact to surfaces at temperatures as low as 38 to 48 degrees C can lead to permanent skin damage such as erythema ab igne, otherwise known as hot water bottle rash. While surface temperatures of 50+ degrees are common in smartphones and tablet computers these temperatures are not well-suited for a head-mounted device likely to be worn for long periods.

The authors conclude: "Thus, the Glass design is not suitable for always-on use, including long-term AR [augmented reality] and mobile vision." They add: "We have shown that power should be constrained to a safe user limit much lower than the typical TDP [thermal design point]."

The authors go on to discuss various ways of constraining the power consumption and surface temperature in terms of adding more efficient application-specific processors, but principally the paper cautions that applications and the system should be redesigned for thermally-aware, graceful degradation.

"For instance, when the thermal limit is reached during video chat, the resolution, frame rate, encoding quality, bitrate, etc. must be reduced to avoid physical harm." The paper states the more usual and simplistic approaches of reducing clock frequency, disabling cores, or killing processes are not satisfactory.

Draining our Glass: An Energy and Heat Characterization of Google Glass