Delivering his first Intel Developer Forum (IDF) keynote address since taking over for Paul Otellini in May, Krzanich said the Quark family of system-on-chip (SoC) devices would be Intel's smallest ever SoCs at approximately one-fifth the size of the company's Atom chips. He said the Quark devices would consume about one tenth of the power compared to Atom processors.

Krzanich said the Quark devices would feature "lower power and a small form factor than I think anyone thought the Intel architecture could go." 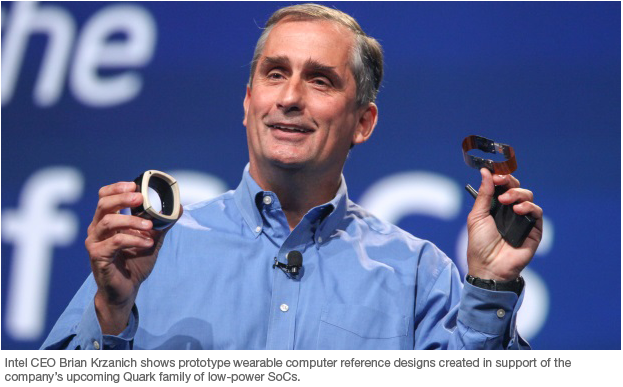 Intel plans to begin sampling reference boards based on the first Quark product during the fourth quarter of this year. The reference boards, which will be created for sample applications for things like wearable computing, are designed to help customers accelerate the development of products initially aimed at the industrial, energy and transportation segments, Intel said.

The markets for both wearable computers and the Internet of Things are still in their infancy. Eventually each are expected to be worth tens of billions of dollars per year.

Krzanich was joined on stage Renee James, who was named president of Intel in May. James spoke for about 30 minutes about the potential applications of integrated high-performance computing in areas such as health care. She described her vision for an era in which every device and every object computes and said that integrated computing solutions must be smaller, faster, more versatile and produced in higher volume.

During her remarks, James declared that Moore's Law is still alive and well at Intel, despite frequent predictions of its demise. "I can assure you that it's alive and well," she said, adding that Intel has its 14-nm process technology ready to go and that the company can "see beyond that."

While Intel has to date struggled to gain meaningful market share in mobile computing devices like smartphones and tablets, Krzanich pledged that the company would achieve success in those areas as well as maintaining leadership in servers and PCs and take the lead in emerging segments like wearables and the Internet of Things. "Our plan is to lead in every segment of computing," he said.

In his first IDF keynote, Krzanich touched on several other topics, including: