Demand for wearable electronic devices is set for impressive growth driven by the fitness and health monitoring market over the next five years. As a result, the sensors used in wearables will rise as well reaching 466 million units by 2019, according to a new report from IHS Technology. 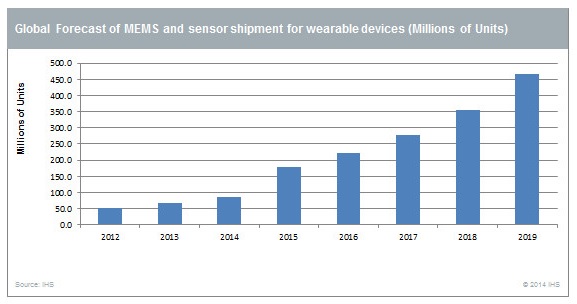 The reason for this difference is the fact that wearable devices will incorporate an average of 4.1 sensor elements by 2019, up from just 1.4 on average in 2013.

Jérémie Bouchaud, director and senior principal analyst, MEMS & Sensors, at IHS Technology, said in a statement the wearable market will be a hotbed for sensors with an increasing number of components sold in each product. “The main factor propelling this phenomenon is a transition in market share away from simple products like pedometers and toward more sophisticated multipurpose devices such as smartwatches and smartglasses,” Bouchaud said. “Instead of using a single sensor like the simpler devices, the more complex products employ numerous components for health and activity monitoring, as well as for their more advanced user interfaces.”

IHS said that because wearables offer a better platform for some types of sensors than smartphones, components such as humidity sensors and pulse sensors could make the move from handsets to wearable devices – such as smartwatches. The Apple Watch will be a major acceleration point for sensors in wearables helping sensor shipments to double next year with shipments of sensors for smartwatches surging by nearly 600 percent, IHS forecasts.

“Similar to the iPhone and iPad, IHS expects the Apple Watch will set a de facto standard for sensor specifications in smartwatches,” Bouchaud said. “Most other wearable OEMs will follow Apple’s lead in using these four devices—or will add even more sensors to differentiate.”

IHS said it forecasts smartwatches to take the top position in the wearables market starting next year and throughout the forecast period, supplanting fitness and heart rate monitors and pedometers as the lead wearable application.