The buzz surrounding smartwatches and other wearable technology is going to have big benefits not only for the companies producing them but for display vendors as panel revenue climbs to $22.7 billion by 2023, according to a new report from IHS Technology.

The wearable electronic display panel market is set for very rapid growth in the years to come as more smartwatches and other devices become available from vendors such as Samsung, Apple and others. The market is projected to amount to just $300 million in revenue this year but will climb more than 80 percent annually for at least four more years as high resolution and color displays are adopted in devices. This growth will continue to expand, IHS said, until 2013 when the market will be worth some $22.7 billion. 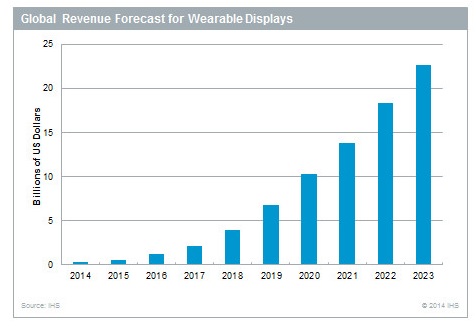 At the recent IFA tradeshow in Berlin, Germany, Samsung, LG, Sony, Asus and Motorola detailed smartwatches in order to take advantage of a burgeoning market poised to surge in shipments to 800 million by 2013, up from 54 million this year, according to IHS forecasts. These watches all have one thing in common, a flexible display that features a curved screen and is large enough to accommodate user control functions.

The one smartwatch that does not feature a curved screen is Apple’s recently announced Apple Watch, which features a square display but will no doubt be one of the frontrunners in this space given the pedigree.

IHS said that the opportunities for wearable devices have cropped up due to the advances in flexible displays, enabling the kind of innovations that have been seen with these recent smartwatch (and other wearable) devices.

“Wearables are best viewed as functional fashion accessories rather than as electronic goods,” said Sweta Dash, senior director for research and display at IHS. “But because the fashion accessory market is determined by design rather than by simple function, wearable products such as smartwatches must be adaptable to various forms including squares, circles or even ovals.”

But this type of wearable application is just the beginning, Dash said. As display panels for wearables need three elements for applications – outdoor visibility, low power consumption and flexibility – new forms of displays, such as stretchable panels that may come in the near future, will open up even more possibilities for exotic shapes and forms as consumer demands become hungrier for wearable devices.

IHS also expects future wearables will be efficient, low-power flexible displays with longer battery lives that will enable increased functionality in a small form factor. Dash said that while the next wave of wearables will most likely be in the smartwatch category, this market could expand to other devices in gaming, infotainment or health monitoring.

As with the current crop of wearable displays, IHS sees the future of wearables to be organic light emitting diode (OLED) based because these displays are self-emissive with no backlight and feature excellent flexibility, faster response times and impressive video quality.

Not ready for prime time

There is a fundamental issue, however, with the current crop of wearable devices – whether it be smartwatches or smartglasses such as Google Glass – and that is that consumer adoption may be slow. The current available models are expensive making them less appealing to all consumers. Also, there isn’t a clear value in replacing a traditional watch with a fancy app-heavy timepiece.

As a result, IHS believes wearables need to hit the right combination of price, performance, form factor and usability to reach critical mass. Until that point happens, smartwatches may take a long time to gain traction, IHS said.