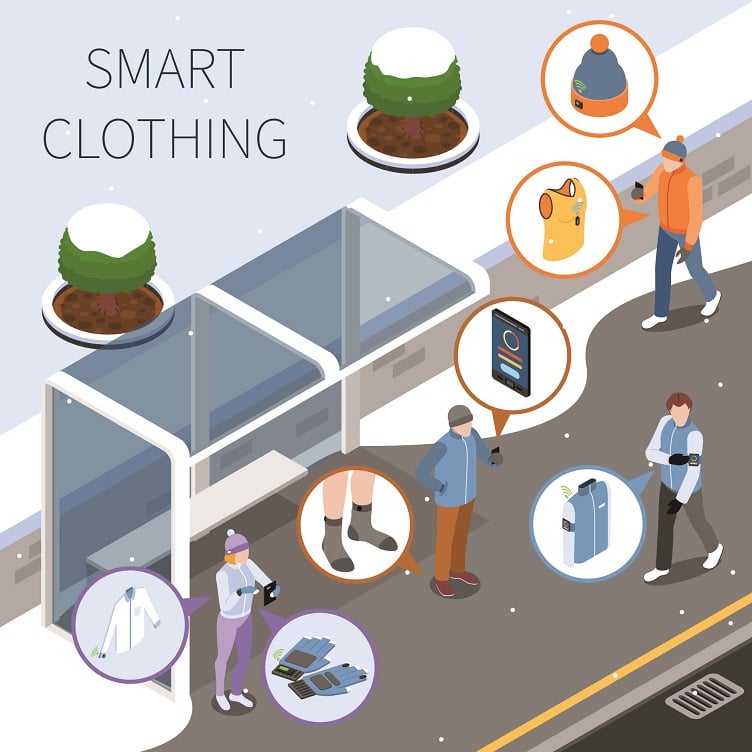 e-textiles are one type of wearable sensors that involve sensors being sticked into clothing to monitor health stats, track sleep patterns and more. Source: AdobeStock

Wearable electronics refer to textiles and clothing with integrated electronic technology or other computing devices that provide smart functionalities. These smart textiles augment creativity, intellect, communication, memory and physical senses. This definition does not only apply to garments but to everything that can be worn on the body. Once combined with electronic technology, watches, caps, shirts and glasses, for instance, can all contribute to the very wide spectrum of wearable electronics.

Wearable technology that relies on sensors to measure how the body maneuvers offers consumers data about themselves. With evolving sensors technology, wearables now have a deeper measuring ability. Consequently, consumers know more about themselves and can make subsequent lifestyle changes.

Accelerometers are sensors used in wearables. Their brand of acceleration, such as gravity and linear, demonstrates their sensing capabilities. Meanwhile, their measuring ability enables the programming of measured data for different purposes. For instance, a user who runs can access his or her top speed output along with acceleration. Further, accelerometers can track sleep patterns.

Gyroscopes are also a common wearable sensor. They differ from accelerometers by recording only angular accelerations. In some implementations, the accelerometer is used to measure rotational acceleration, while some systems would like to incorporate both for filtering errors. Gyroscopes increase the precision of the data tracked and numerous types are available, including gas bearing, mechanical and optical.

Magnetometers can be integrated to create an inertial measurement unit (IMU) with accelerometers and gyroscopes. All of these sensors can feature three axes each, are very similar to a compass and can improve balance. While gyroscopes and accelerometers are usually used with them, magnetometers match them by filtering the motion orientation.

GPS is a common sensor used on many devices such as smartphones and smartwatches. It is used for scanning and informing users of their location. Information is sent to a satellite to quantify exact location and time. This serves as a transmitter and a receiver in which the information is returned to the sensor to notify the location.

Various techniques and sensors are available for measuring heart rate. One method uses capacitive sensing to idealize the electrode (sensor) and the skin as two parts of a conventional capacitor. Photoplethysmography is a technique that uses light to track blood flow volume changes. Fitness trackers like Fitbit rely on this approach using a photodiode. There is a continuous green light transmitted to the skin of the wearer, which measures the light absorption by the photodiode. This information is transferred so that pulse can be calculated. An increase in the blood passing through the user's bloodstream, the more light the diodes absorb.

Pedometers are typically found in wearables focused on physical health and can count the user's steps while running or walking. There are two variants of pedometers: electrical and mechanical. The former is the most popular form today and depend on MEMS technology for efficiency, but still operate on mechanical pedometer-based principles.

The pendulum function is used to assess the pedometer user's steps. A tiny metal pendulum is used in two-ended pedometers, one with a screw. The hammer swings and hits the other every time a user takes a step and then returns to its original location. The mechanism is linked via spring to an electronic counting circuit. At first, there is no current, and therefore an open circuit is closed each time the hammer hits the other side. Thus, current starts flowing. Once the pendulum moves back to its initial point, the circuit closes again, and the pendulum rotation starts anew. This allows the circuit to understand each step.

Usually, pressure sensors operate from strain gauges. When pressure is applied to sensors, the circuit causes a change in resistance. Mechanical quantities like force are observed in many ways and are transformed into resistance-dependent electronic measurements. This method of measuring pressure is achieved through the construction of a Wheatstone Bridge, which can track static or dynamic resistance changes. The sensing device will comprise one, two or four arms in the configuration of the Wheatstone Bridge. The number depends on the use of the device (how many in tension and compression). The sensor mechanism allows them to be integrated into external factors such as ball contact monitoring equipment.

Integration of sensors into wearables

A microcontroller is a key component to enable wearable technology to operate. It is commonly seen as a small computer (the chip system) that allows the integration of the internet of things (IoT) with the desired application. Most significantly, it eliminates the use of many electronic components to execute different functions on a single chip. Due to its ease in programming, reprogramming, cost, size, connectivity with other sensors and the ability to handle complex functions, including graphic displays, it is best used in wearable technology. The versatility enables microcontrollers to customize to suit the customer requirements.