Imagine a pivotal World Series game four. Down two games to one and behind early, a batter steps up to the plate. Four quick pitches and a strikeout later, he walks to the dugout, wondering what went wrong. Sure, he can talk to a hitting coach or a teammate to assess what he’s doing wrong. But he won’t get a chance to really fix his problem until his next at-bat. What if he had a sensor on his bat or batting gloves? A sensor like the one from Zepp Labs that analyzes swing motion, bat speed, hand speed and swing plane. The batter receives instant feedback the minute he steps back into the dugout. He can pinpoint the part of his swing that is failing him, and by his next trip to the on deck circle he knows exactly what to fix.

Zepp Labs Inc, maker of the Zepp Sensor, just raised $15 million in venture funding in an effort to popularize their Sensor and app. Currently, Zepp Labs’ Sensor helps golf, tennis and baseball players analyze their swings. The sensors attach to a golfer’s glove, or a batter or tennis player’s bat or racket, and record information from the athlete’s swing motion. Then the app, connected to the sensor by Bluetooth, provides the athlete with data, perusable in 3D.

Zepp isn’t the only startup making headway in the sports sensors market. Strava Inc. produces GPS-enabled apps to track performance data for cyclists and runners. Both companies have aggregated anonymized data from tens of thousands of athletes to provide users with actionable insights into their workout routines and training sessions. Zepp and Strava are unique in that they target specific sports rather than all athletes as a broad group.

It’s no surprise that Zepp and Strava have thus far succeeded. IHS predicts the market for sports, fitness and activity monitors will expand. Analysts such as Shane Walker, senior manager for medical devices and healthcare research at IHS, expect global revenue for the market to grow to $2.9 billion in 2019, up from $1.9 billion in 2013. In 2014 alone, revenue is expected to rise to $2.2 billion, a 2.2 percent increase, as shown in Figure 1. 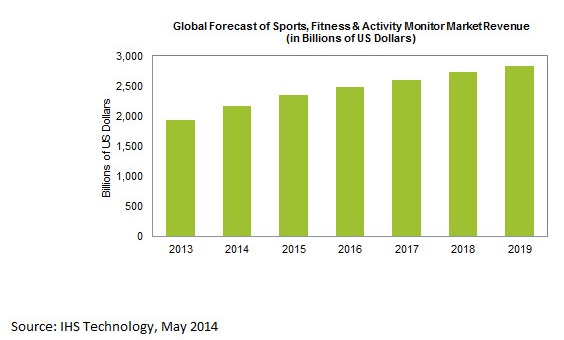 Walker recognizes the potential for devices such as those from Zepp and Strava that focus on individual sports. “There is definitely a place for these sensors in the world of sport monitoring,” he said. Walker noted that despite current healthcare and fitness monitor competitors, these new sensors offer a unique proposition. “While most of the devices [IHS has] covered in the past have been designed to monitor an individual’s performance in terms of distance traveled, speed and heart rate, these sensors are designed to provide insight concerning particular actions with individual and team sports, and for the fine turning of a particular skill.”

Shipments of sports and fitness monitors are expected to rise. By 2017, global shipments should rise to 56.2 million units, up from 43.8 million in 2013 according to IHS. Companies like Strava and Zepp will account for some of this market, as will other startups in the space.

InfoMotion Sports Technologies, for instance, is developing 94Fifty, a smart basketball. The basketball helps athletes learn about their shot technique in order to improve their skills. The Shockbox football helmet sensor fits inside a helmet. Its task is to measure the impact players take during collisions. Coaches can access this data instantaneously, and are alerted when a player is involved in a collision that may give him a concussion.

Developments such as the Shockbox football helmet sensor will help coaches and athletes focus on safety enhancements along with performance and training tips. This will be an especially important factor in a time when North America’s biggest sports leagues – NFL and NHL – are being sued by former players over trauma caused by concussions and concussive collisions.

Startups aren’t the only companies diving into the athletic equipment sensor market. “Top brand names in the sports apparel and equipment industry have flocked to the market,” Walker said. Adidas, for example, has designed the miCoach Smart Ball, including an iOS-only app. The ball looks and feels like a typical soccer ball but includes, in its center, a number of accelerometers. The accelerometers are designed to measure factors such as power and spin, and deliver data about a player’s strike on the ball.

The miCoach Smart Ball is even FIFA-approved. Adidas’ miCoach collection of equipment also includes the Smart Run Watch to help with cardio training; a heart rate monitor; and the Bluetooth compatible X Cell and Speed Cell, which monitor quickness, jump height, reaction speed, and workout intensity among a host of other data points. The Top 20 names in the sport, fitness, health, and wellness market experienced a compound annual growth rate (CAGR) increase of 10.3 percent from 2010 to 2013 according to IHS -- evidence the pump is primed for growth.

Beyond sales and shipment volumes for physical accessories, app downloads will constitute an important segment of the sports equipment sensors market. Walker believes “apps are important in this industry; they help make the data meaningful to the user.” A sensor may record and spit out thousands of pieces of data, but that information is useless to the athlete unless he can access the data in an organized format. The market for sports equipment app downloads should remain strong as well. IHS forecasts that global downloads of mobile apps for sports and fitness activities will rise 63 percent from 2012 to 2017. That increase represents 248 million downloads in 2017, as shown in Figure 2. 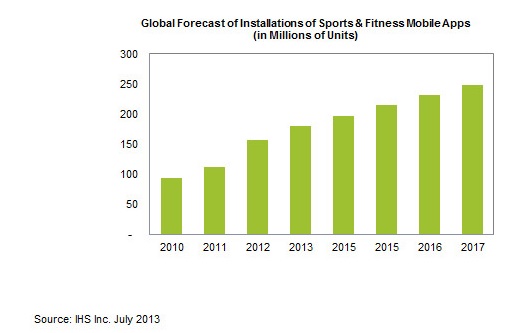 Sports and fitness apps have now become a part of the daily routines of millions of mobile users. The sensor-enable equipment market should grow along with the mobile device market. An IHS consumer survey found that 62 percent of respondents interested in using sports and fitness apps were also prepared to purchase hardware that goes hand in hand with the software in the apps. “For makers of sports and fitness sensors and monitoring devices,” Walker said, “this means a built-in audience exists for products that can work with fitness apps.”

IHS analyst Andrew Robertson agrees that mobile compatibility will help spur growth in the sensor-enabled sports equipment market. “I think mobile will play a key role in this,” says Robertson. “You see mobile devices being used across many new applications [such as] monitoring and controlling parts of manufacturing lines [and] people controlling temperature of their homes remotely, so you would expect this to also play a part in this sportswear application.”

Perhaps the greatest barrier to entry for consumers is the price point of many of the physical equipment pieces. The miCoach soccer ball retails for $299, while the smart watch retails for $400. InfoMotion’s 94Fifty basketball retails for $249.99, and Zepp’s equipment packages – sensor, sport-specific mount, and charging accessory – retail for $149.99. The vast majority of sensor-enabled sports equipment, however, is priced at less than $200, according to IHS. The majority of apps that accompany sensor-enabled devices are free to download. Strava’s app has an estimated 4.2 million global downloads, while the three Zepp sports apps – baseball, golf, and tennis – have a combined estimate of 32 million downloads.

The sensor-enabled sports equipment market remains inextricably linked to the smartphone market. The projected growth of the latter should help the former. As global smart device shipments rise, global shipments of sensor-enabled sports equipment will rise, too. More than 250 million total units are expected to ship during the next five years, according to IHS forecasts. Perhaps the most compelling data point is that, according to Walker, “even in tough economic conditions, the fitness monitoring market has continued to expand, showing the resiliency of demand for the technology.” Indeed, the United States Census Bureau predicted an 11 percent increase in sports equipment sales for 2010 (its most recent data available) after two consecutive years in which the percentage changes for sales were double-digit negatives.

Designers of sensor-enabled sports equipment have smartly tied their products to the mobile device and app market. As long as mobile downloads and app usage continues to prosper, hardware such as Zepp’s will continue to have a built-in audience. That should prove a powerful data point for future market entrants.

U.S., China Hold Close to Half of the World's Planned Solar Projects