STMicroelectronics has rolled out a new thin-film piezoelectric microelectromechanical systems (MEMS) actuator for use in autofocus in camera modules as well as other consumer applications.

ST said that it has already captured a design win for the actuator in poLight for its tunable lens technology that uses the piezo actuator to change the shape of a transparent polymer film, imitating the focusing function of the human eye. poLight’s TLens product then would be fitted into a camera autofocus to replace the venerable, albeit large and power-hungry, voice coil motor (VCM) technology.

ST already has an extensive line of actuators for other markets including actuators in Hewlett-Packard’s inkjet printers, in micro scanning mirrors for pico-projectors and for insulin pumps for Debiotech’s products.

However, MEMS autofocus devices have not been commercially successful until now with only a few start-ups playing in the market. DigitalOptics failed to ramp up production with a non-piezoelectric device despite being designed into OPPO handsets at the end of 2013. DigitalOptics shut down its facility shortly thereafter. poLight was working with Texas Instruments (TI) as its foundry partner until the end of 2013. But in 2014, TI stopped working with poLight and the company has been in a difficult situation since. French start-up Wavelens has been looking for funding but with the other two start-ups in this market experiencing issues, they have had difficulty convincing anyone to invest in the technology.

“The fact that ST is jumping into this market sheds a positive light again on this emerging MEMS market,” Bouchaud said. “Some OEMs in Asia – not only in China – are very interested in this technology.”

IHS’ forecast is pessimistic, Bouchaud admits, because the market had been looking grim for the players in the market. IHS forecast’s the revenue for MEMS actuators in camera modules will grow to $44.1 million by 2018, up from $0 in 2013, as shown in Figure 1. The first viable revenues in this market will begin in 2015 with $1.4 million and will manage a compound annual growth rate (CAGR) of 217.4 percent. 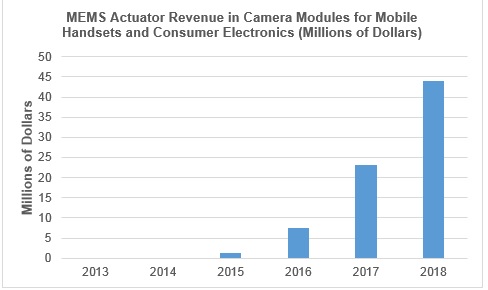 The pilot line for ST’s piezo MEMS actuators could be used for other potential applications such as inkjet printheads in the commercial, industrial and 3D printing markets, the development of piezo sensors in fields such as energy harvesting and more. ST is targeting volume production in mid-2015.