IoT a Boon for MEMS

The Internet of Things (IoT) is having a dramatic impact on the growth of microelectromechancial systems (MEMS) market with growth expected to rise substantially in the next five years, according to a new report from IHS Technology.

MEMS devices in industrial IoT equipment, such as asset-tracking systems, smart grids and building automation, will grow to $120 million in revenue by 2018, up from just $16 million in 2013, IHS forecasts. MEMS that are deployed as support chips for IoT, such as in data centers, will result in an additional $214 million in 2018, up from $43 million last year, as shown in Figure 1. 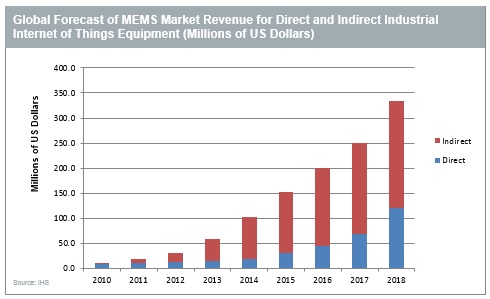 The industrial market for IoT equipment is a burgeoning market with 7.3 billion units expected by 2025, IHS forecasts. This market comprises things such as nodes, controllers and infrastructures from building automation to commercial transport, smart cards, industrial automation, lighting and health. The MEMS playing to these spaces include accelerometers, pressure sensors, timing components and microphones.

Jeremie Bouchaud, director and senior principal analyst for MEMS and Sensors at IHS, said in a statement that MEMS “will play an essential role in expansion” of the industrial IoT segment for years to come. He added that IoT represents a “major new growth opportunity for the MEMS market.”

Of the largest markets inside IoT for MEMS will be building automation, followed by asset tracking, IHS said. The smart grid will also require MEMS, such as inclinometers for high voltage power lines and accelerometers and flow sensors in smart meters. Other segments include smart cities, smart factories, seismic monitoring and drones and robotics.

Sharp's MEMS-IGZO Display Due in 2015