The deal is the first major win in MEMS for UMC, IHS believes, and it should help UMC to develop a larger MEMS business similar to how Taiwan Semiconductor Manufacturing Corp. (TSMC), GlobalFoundry and X fab have managed to accomplished in the past three years.

UMC is the third largest semiconductor foundry (11 percent share in 2013), behind TSMC (with 56 percent) and GlobalFoundry (with 12.3 percent). Like other successful semiconductor foundries, UMC has tried to develop a MEMS business since 2008, however, without much success. IHS estimates that UMC owned only 1.6 percent of the MEMS pure play foundry business in 2013, as shown in Figure 1. 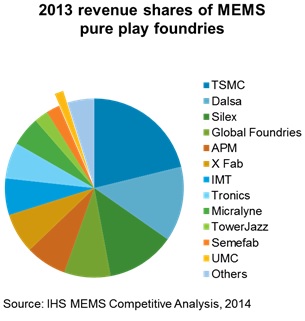 NJR is a new but fast growing player in the MEMS microphone dies business, ramping up production in 2013 and IHS has the company shipping 80 million MEMS microphone dies in 2013. NJR owned 6 percent of the MEMS die business in 2013, up from 0 percent in 2012, as shown in Figure 2. The company is focused on delivering MEMS with an ASIC and selling it under their own brand, similar to what its competitors, Infineon and Omron, are doing. 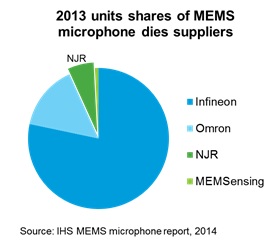 Samsung’s SmartThings Acquisition: A Sign of Things to Come?