Knowles Corp. and Infineon Technologies AG were the two largest suppliers of microelectromechanical system (MEMS) microphone chips in 2013, according to a new study by IHS Technology.

Knowles, based in Itasca, Ill., was the biggest supplier of packaged MEMS microphones ready for assembly on printed circuit boards, according to the report. Germany’s Infineon was the leader one layer below, supplying bare MEMS dies to MEMS microphone makers.

Knowles accounted for 59 percent of the market’s total revenue among packaged MEMS microphone suppliers, up from 55 percent in 2012, according to the report, "MEMS and Sensors Report – Microphones – 2014." Infineon owned 78 percent of the MEMS die trade in terms of unit shipments, the report said.

Among microphone suppliers Knowles increased its revenue 59 percent in 2013 compared to the previous year. Knowles has been especially successful growing its business by making high-performance microphones priced at a premium for Samsung and Apple, the leading buyers of MEMS microphones.

While Knowles was No. 1 in MEMS microphone sales in 2013, the company ranked fifth in MEMS sales overall, well behind market leader Bosch, among others, according to an IHS report released in March.

Knowles supplies two of the three high-performance MEMS microphones in Apple’s iPhone 5s and one of three in the iPhone 5.

MEMS microphones have become important differentiators in smartphones, according to the IHS study. The highest quality MEMS microphones areuseful in cancelling out ambient-noise and in delivering crystal-clear audio inhigh-definition video.

Apple was the first to use high-performance MEMS microphones in its iPhone5 in 2012. Samsung followed suit shortly afterward using them in its Galaxy S4 and Note 3 smart phones. MEMS microphones are now also found in tablets like the Apple iPad and in Apple headsets. 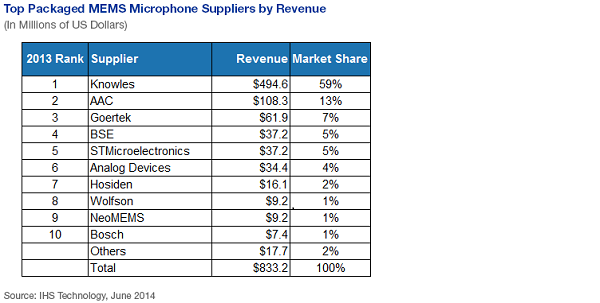 At a distant second after Knowles was AAC with 13 percent revenue share, followed by No. 3 Goertek with 7 percent share, according to the report. Both suppliers are from China whose business also heavily depends on Apple.

AAC supplies one of the three high-performance microphones in the iPhone 5 and is now in the 5s, while Goertek is the main supplier for the MEMS microphone in the headset that sells along with the iPhone.

Meanwhile, fourth-ranked BSE of South Korea increased its revenue 250 percent in 2013. It supplies Apple rival Samsung. Tied in fourth place with BSE was French-Italian STMicroelectronics, which continued boosted its MEMS microphone business after gaining design wins in the iPad.

While Knowles designs its own MEMS, a growing number of MEMS microphone suppliers focus on packaging, including makers such as AAC, Goertek, BSE and Japan’s Hosiden. These companies buy standard MEMS die and an application-specific integrated circuit (ASIC), and then package them for selling under their own brand.

The four have no MEMS or semiconductor expertise, but have acousticsand assembly and packaging capabilities.

Infineon dominates the MEMS bare die business accounting fornearly 75 percent of total shipments and supplying to major customers like AAC,Goertek, BSE, Hosiden and Gettop. Infineon’s growth increased up 204 percent in2011 and 50 percent from 2012 to 2013.

Two suppliers that are looking for bigger share of the business are Omron Corp. and New Japan Radio. Omron is expanding to customers in China and Taiwan besides serving main customer STMicroelectronics, which potentially could be developing its own microphone die.

The bare die business is plagued by inflated inventory building in order to compensate for yield losses at various steps of the supply chain, including the wafer dicing stage, the packaging phase, and assembly on the printed circuit board, the report said.

“Because Apple releases a huge-selling handset every year, and given the severe penalties imposed by Apple for delays, the MEMS microphone supply chain must overestimate component supplies in order to ensure it can meet Apple’s demand,” he said. This leads to microphone inventory being accumulated at every point in the supply chain.