Due to a number of factors, many erroneously believe that the time division duplex (TDD) mode of Long Term Evolution (LTE) is a separate standard developed and adopted primarily by one country. Some of these factors include the genesis of the 3G standard TD-SCDMA which utilizes a similar time division approach as that of TDD LTE as well as the early adoption of TDD LTE being primarily in China. Be that as it may, both the TDD and frequency division duplex (FDD) modes of LTE are part of the same ratified standard and has been, and continues to be, developed and adopted by a variety of countries, suppliers, manufacturers and mobile network operators.

As such, the primary factor in mobile network operator’s decisions regarding adoption of the TDD mode is less about TDD LTEs origin and really has more to do with spectrum and the need for utilizing as much of it as is available in any given country. For device OEMs trying to support as many mobile network operator partners as possible, this means that their ability to rapidly and profitably deploy flexible handset designs which can be brought to bear across many different markets and spectrum requirements will be critical in maximizing their share of the growth being driven by LTE adoption in all of its forms.

Are Two Heads Better than One?

When it comes to choosing which mode to use, some mobile network operators don’t have a choice at all. Some spectrum bands can only do TDD such as, among others, bands 40-44 and if those are the only bands available, TDD is the only mode that may be used. This is because while in TDD the channel supporting both the forward and reverse links share the same exact frequency. The channels in FDD require a paired set of frequencies to support both directions. These paired frequencies are usually about 45 MHz apart from each other but could be as far apart as 400 MHz such as is the case with the AWS band in North America.

Therefore, in order to field a certain size channel (whether it be 5, 10, 20 or more MHz channel), FDD requires more physical spectrum than does TDD. Consequently, due to the amount of spectrum assigned to bands 40-44, channels within those bands can only support TDD, as shown in Figure 1. 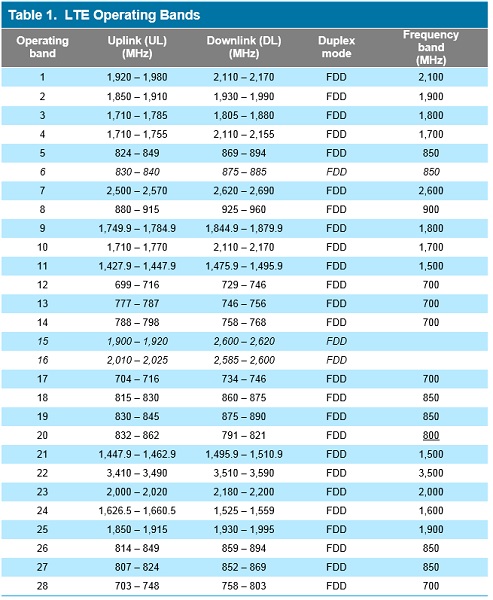 In some markets, mobile network operators have the choice to acquire and deploy on one or the other type of spectrum. In these situations, a decision must be made regarding which mode to implement. Given the nature of time division duplex versus frequency division, there is a hypothetical advantage for TDD in asymmetric use cases such as browsing the Web and FDD in symmetric use cases such as video conference calls. However, in practical deployments and performance tests, assuming the networks have been designed and optimized to a similar degree, both modes work well in either type of use case. Any hypothetical advantage one might have on the other really only materialize in specific situations, network loading and RF conditions. When it comes down to it, selection really comes down to which spectrum does the mobile network operator have the best chance of acquiring as well as getting the best ecosystem support in terms of equipment, device and chipset availability.

In the most fortunate of circumstances, some operators are lucky enough to be able to have acquired both types of spectrum and are able to deploy both modes on the same network. For those in this situation, aside from capacity optimization, mobile network optimization engineers might also use the availability of both modes to maximize performance in specific cell coverage areas, use cases, and loading profiles as mentioned earlier.

Like the Euro being one currency that is accepted in multiple countries, having one design based on one chip or chip family to deal with as many different modes and spectrum availability, is critical in LTE modem partner selection. With the kind of possible variability discussed above in their customer base, mobile device OEMs are faced with the challenge of efficiently and profitably designing their devices while still maintaining differentiated levels of performance. As such, as LTE modem solutions come to market, helping OEMs address this challenge should be a critical aspect of modem partner selection. Having a chipset platform that can do both FDD and TDD or at least are pin and/or software compatible will help in enabling, at the very least, design flexibility if not SKU (or stock keeping unit) efficiency as well.

With LTEs increase in adoption and penetration both in the high and low ends of the industry, time to market of high quality handsets will be critical. Without chipsets that can do both or are at least pin and software compatible, OEMs will need to go through multiple design and commercialization cycles to address the band/mode variability faced by their customer base. Alternatively, OEMs will need to artificially limit their customer base to those markets for which they can design devices within the performance and time requirements in order to remain competitive.

Once the handsets are launched, the other challenge for device OEMs due to the mode/band variability is optimizing forward logistics. For those OEMs with global aspirations, utilizing a chipset which can support both FDD and TDD in one chip will allow for a minimization of the number of different SKUs that must be maintained, managed and tracked enabling a more streamlined operation resulting in lower inventory levels, faster response times to customers as well as lower operational expenditures and ultimately increased bottom line profits. When this is exponentially multiplied against the added variability engendered by carrier aggregation in both of these LTE modes, it is easy to see the effect that discriminating chipset platform selection can have on operational efficiencies.

Even as current chipsets attempt to address the challenges above that LTE device OEMs must face, new requirements, advanced LTE features and applications must be designed for and considered to ensure future proofing of existing designs. So far in these articles, IHS have explored the critical areas of assessment of LTE modems in terms of baseband and protocol stack functionality, radio frequency ramifications as well as multimode capabilities.

As important as those things are, any assessment would be remiss if the services that LTE enable, and the role that the modem plays in delivering world class user experiences were not fully analyzed as well. In the next and last article in this series, IHS will explore rich communication suite services such as VoLTE and how the right modem can maximize not only subscriber but mobile network operator loyalty as well.