Memory chip company Micron Technology Inc. (Boise, Idaho) announced the development of a computing architecture based on memory and a first processor implementation optimized for the search and analysis of unstructured data streams.

Micron calls the architecture Automata, and the Automata Processor (AP) is an accelerator intended to address such areas as image and video analytics, network security and bioinformatics.

Automaton processing is a branch of computer science that has existed for about 30 years but one that, until now, has been largely academic. It is based on large numbers of simple computational elements that activate or deactivate in response to specific input values. It differs from conventional processors, which are based on relatively few complex arithmetic logic units.

Because of its alliance of simplicity with massive parallelism and extensive use of memory, the automata processing approach is capable of performing high-speed, comprehensive searches, pattern matching and analysis of complex, unstructured data streams. The AP typically comprises tens of thousands, to millions, of processing elements that can be interconnected to create a task-specific processing engine.

The abundance of memory and interconnect also demonstrates similarities to FPGAs and neural networks, although automata processing has rules for how symbols are transferred and transformed.

There happens to be a close correlation between the physical requirements for automaton processing and the resources available in a memory array. Micron's first Automata processor implementation is based on a DDR3 synchronous DRAM and has an 8-bit DDR2 bus interface. It is capable of processing 8-bit input symbols at 1 Gbits per second per chip, according to a technical paper due to appear in IEEE Transactions on Parallel and Distributed Systems. 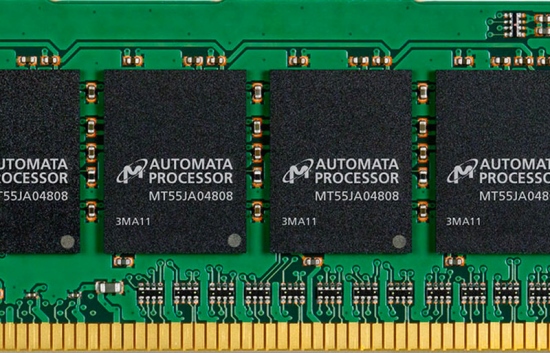 The AP is implemented in a memory process. Graphic design and simulation tools—along with a software development kit (SDK) to enable developers to design, compile, test and deploy their own applications using the AP—will be available in 2014, Micron said.

Micron is working closely with ecosystem partners and research institutions to grow awareness and engagement for this new technology. Together with Srinivas Aluru, professor of computational science and engineering at the Georgia Institute of Technology, Micron is using the AP to solve problems associated with applications in bioinformatics.

Although there are some similarities with FPGAs, the IEEE paper authors claim that Micron's AP chip matches or exceeds the performance of high-capacity FPGAs programmed with comparable functionality, while providing greater logic capacity and offering superior capabilities in incremental and dynamic updates. In particular, the ability to interrupt and resume processing is seen as beneficial.