Researchers from Pennsylvania State University have developed a tunnel field effect transistor (TFET) that uses the quantum mechanical tunneling of electrons through an ultrathin energy barrier to provide high current at low voltage.

If the device is brought to commercial fruition it could potentially serve applications that need both high speed and low power such as smart sensor networks, implantable medical electronics and ultra-mobile computing.

Researchers consider tunnel field effect transistors to be a potential replacement for current CMOS transistors, as device makers search for a way to continue shrinking the size of transistors and packing more transistors into a given area.

The main challenge facing current chip technology is that as size decreases, the power required to operate transistors does not decrease in step.

The Penn State researchers had previously developed a replacement for MOSFET transistors used in logic applications and to address power issues. Lead author and Penn State graduate student Bijesh Rajamohanan explained: "In this work we went a step beyond and showed the capability of operating at high frequency, which is handy for applications where power concerns are critical, such as processing and transmitting information from devices implanted inside the human body."

For implanted devices, generating too much power and heat can damage the tissue that is being monitored, while draining the battery requires frequent replacement surgery. 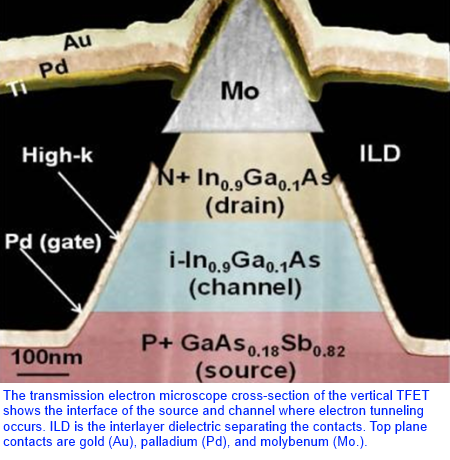 The researchers, led by Suman Datta, professor of electrical engineering, tuned the material composition of the indium gallium arsenide/gallium arsenide antimony so that the energy barrier was close to zero, which allowed electrons to tunnel through the barrier when desired. To improve amplification, the researchers moved all the contacts to the same plane at the top surface of the vertical transistor.

This device was developed as part of a larger program sponsored by the National Science Foundation through the Nanosystems Engineering Research Center for Advanced Self-Powered Systems of Integrated Sensors and Technologies (NERC-ASSIST). The broader goal of the ASSIST program is to develop battery-free, body-powered wearable health monitoring systems with Penn State, North Carolina State University, University of Virginia, and Florida International University as participating institutions.

The research is detailed in paper presented at this month’s International Electron Devices Meeting in Washington, D.C. The findings were presented jointly by Penn State, the National Institute of Standards and Technology and IQE, a specialty wafer manufacturer.