The board book-to-bill ratio was 0.98, down from 1.00 in August and was the first time the ratio fell below parity this year. A ratio of 0.98 means that board manufacturers received $98 in new orders for every $100 of boards they shipped September. 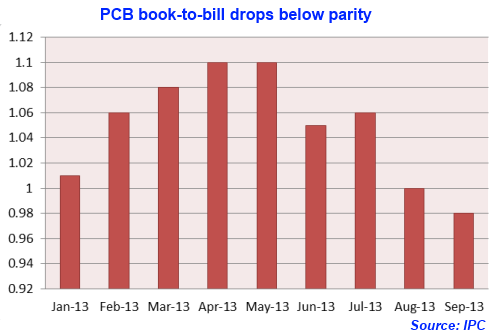 "A combination of slower order growth and shipments that exceeded bookings in August and September brought the book-to-bill ratio below parity to 0.98," said Sharon Starr, IPC's director of market research. Starr added although year-on-year shipment growth of printed circuit boards was still negative "it has been moving in the right direction." She said the recovery that was expected in late 2013 was dampened because of the government shutdown.