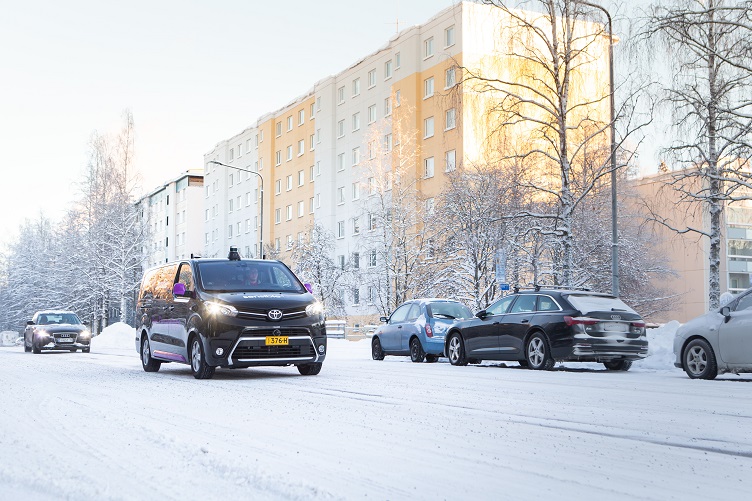 During the pilot project in Tampere, Finland, passengers were transported through heavy snow fall, freezing rain, below zero temperatures and more. Source: Sensible 4

The pilot project, which was announced last year, started in January and lasted for 2.5 months with the goal to see how autonomous vehicles work with public transportation networks in bad weather and collect feedback from users.

Two self-driving Toyota Proace vehicles were used as feeder traffic for the tram trunk line in a suburb of Tampere. The pilot project was part of the European Union’s SHOW project, which aims to find out how autonomous vehicles could work as part of an urban transportation system in the future.

“The self-driving vehicles ran smoothly and felt safe,” said Mika Kulmala, project manager for the city of Tampere. “In the future, I see these kinds of vehicles complementing the public transportation system for certain routes and amounts of passengers. We still need more testing to ensure the reliability in production use, and that the service either brings cost-saving in the areas they are being used or gives better service level to the population with the same costs.”

The goal for the city of Tampere was to test these vehicles as part of its smart city development to strengthen competitiveness of companies and reach institutes in the region and test new urban services.

The vehicles were driving in extreme cold with temperatures dropping below -20° C on some days. At other times, temperature variations above and below 0° C caused the road to be slippery. Additionally, heavy snow-covered lane markings and plighting left high piles of snow on the route.

“Of course, in Finland snowing is everyday life in the wintertime,” said Jussi Suomela, CBO of Sensible 4. “This time it reached almost an extreme level as there were piles of snow on the way and snow ploughs had a hard time keeping the roads open. One of the learnings was how to adapt to a snow ploughing track that in some cases was quite far from the bus stop. Another one is how freezing rain affects the hardware and the third is how to adjust to alternate-side parking.”

The company will continue to operate pilots later this year in Norway, Switzerland, Japan and Germany.

During the Tampere, Finland, pilot, Sensible 4 transported 1,663 passengers, traveled 5,669 kilometers over the course of 560 hours during freezing temperatures, heavy snow, freezing rain and slipperiness due to these conditions.