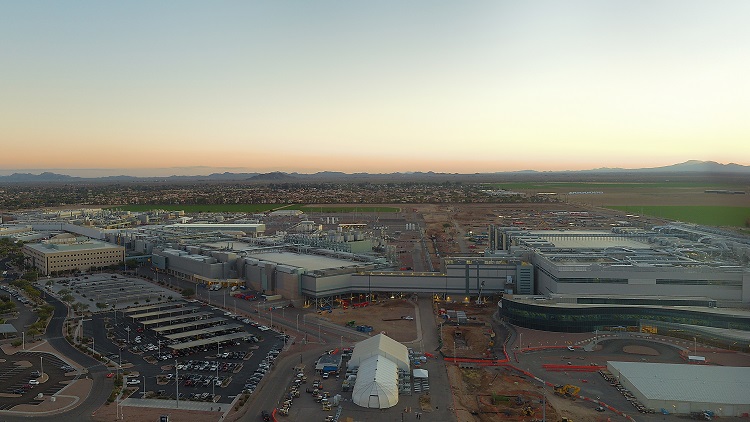 Intel’s Octotillo campus in Arizona is set to expand with two new fabs that will also be the basis for its foundry business. Source: Intel

Intel Corp. said it will start building semiconductors for Qualcomm Inc. and Amazon Inc. as it recently laid out its roadmap for its new foundry business.

Intel also knows that the market for semiconductors is forecast to grow 5% in the next decade due to the increased inclusion of the technology in nearly all industries including automotive, industrial manufacturing, the internet of things (IoT), consumer electronics and more.

Intel told Reuters it expects to regain its lead by 2025 and described five sets of chipmaking technologies it will roll out over the next four years. Additionally, Intel will begin to use ASML’s extreme ultraviolet lithography (EUV) technology that will allow it to tap into a new generation of electronic test equipment.

Qualcomm builds its ubiquitous Snapdragon chips that are used in important communications segments such as 5G smartphones, automotive platforms and recently in an expanded family of wearable chips.

Amazon has an entire laundry list of consumer electronics products from its smart speakers and smart home devices powered by Alexa as well as its Fire brand of tablets and TV sticks.

While Intel did not reveal how much revenue or manufacturing volume these customers would bring, given the volume of chips these two companies use it could be quite substantial. Intel told Reuters the deal with Qualcomm involved a major mobile platform.

The biggest question is likely to be: "Can Intel compete in the processing technology space that TSMC has a substantial leg up on and Intel has struggled in the past to keep pace with?"

Intel has already announced plans to expand its operations for more foundries. Initially with an investment of $20 billion for two new fabs in the U.S. at its Ocotillo campus in Chandler, Arizona.

Finally, Intel is looking to build at least one fab in the European Union and may invest some $100 billion in an eight phase plan for fabs in Europe.