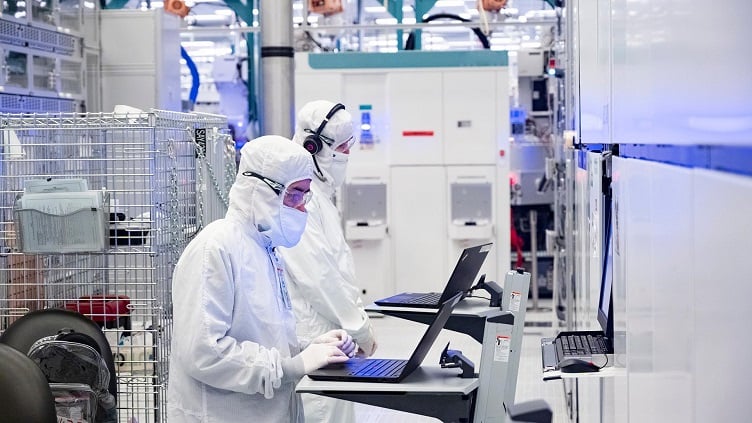 Intel engineers work in a cleanroom in one of its manufacturing facilities. MediaTek will use Intel Foundry Services to build semiconductors for smart devices targeted for the U.S. and European markets. Source: Intel

Intel Corp. has signed up another company for its Intel Foundry Services (IFS) in MediaTek, the Taiwanese smart device semiconductor company that competes with Qualcomm in the smartphone chipset market.

Intel said the agreement is designed to help MediaTek secure a more balanced, resilient supply chain for the U.S and European markets. MediaTek will use Intel to manufacture multiple chips for a range of smart devices including smartphones, tablets and more.

The partnership with MediaTek is the third confirmed partner for IFS. Last year, Intel announced it would build chips for Qualcomm and Amazon as it looks to expand U.S. domestic semiconductor manufacturing to compete against the likes of Taiwan Semiconductor Manufacturing Co. and Samsung Electronics.

Additionally, Intel Corp. in February said it would acquire pure-play foundry Tower Semiconductor for $5.4 billion to expand its global footprint and technology portfolio for IFS.

MediaTek is really the only challenger to Qualcomm in the smartphone chipset market. Qualcomm’s Snapdragon portfolio has become nearly ubiquitous in the mobile market as well as other smart devices where the company has become almost the de facto supplier.

MediaTek has garnered some momentum in the market this year with new introductions to compete against Qualcomm such as its millimeter wave (mmWave) 5G chipset for future smartphones and two system-on-chips (SoCs) to give smartphone OEMs more differentiation.

The company is seen as an alternative to Qualcomm chipsets, which may be a way to differentiate smart devices in hotly contested regions or to lower the cost of handsets such as in a new generation of mmWave devices that will allow 5G to reach its full potential.

Currently, MediaTek is well positioned in China and has close ties to Chinese smartphone vendors, but it could be also penetrating the Japanese smartphone market as well.

The move to secure foundry capacity from Intel could be a sign that MediaTek is looking to branch out beyond these markets to compete in the U.S. and European smartphone and smart device space.