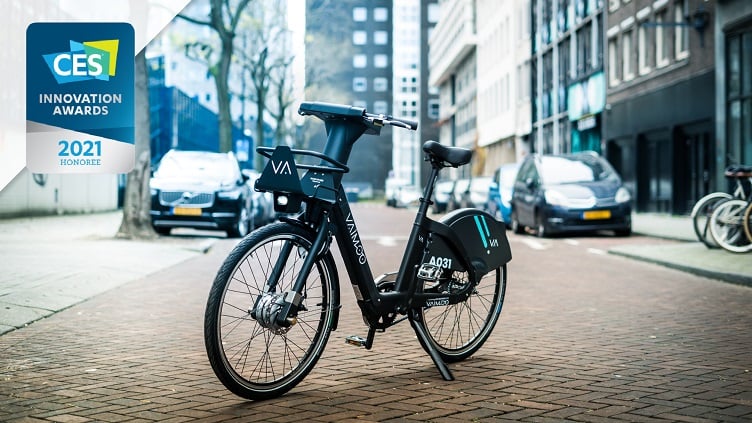 With the push to create alternatives to combustion engine vehicles, automotive OEMs are quickly accelerating plans to roll out new electric vehicles (EVs).

However, other technologies are also being invested in to reduce carbon emissions while still providing the transportation necessary to get commuters to work, to the grocery store and everywhere else. Some examples of those technologies include robotaxis for ride sharing and car-hailing and e-bikes that can be easily shared in urban environments.

Mermec is seeking to make the process of using an e-bike easier with its Vaimoo connected e-bike ecosystem that combines artificial intelligence (AI) algorithms, real-time geo-location and operational data from the field, which was announced at CES 2021.

The Vaimoo system, which is a CES Innovation Awards Honoree, includes e-bikes, charging stations and mobile apps for using the service. The system can be used for a micro-mobility project as well as last-mile transportation scenarios for deliveries for both public and private companies. The system also uses the internet of things (IoT) to integrate with other transportation systems, namely metro train and bus stations.

Users tap the smartphone on a dedicated surface on the e-bike handlebars to begin the app and unlock an e-bike from a docking station or other location throughout the city. A smartphone can also be used as a bike display and smart navigator when the bike is in use.

Mermec said this allows municipalities and different users such as tourists, commuters or students to get the vehicles from multiple areas. When a user is done with it, the e-bike is simply returned to another docking station scattered throughout the urban area.

“Unlike scooters, e-bikes are very democratic because anyone can easily use them,” said Matteo Pertosa, project director and member of the board of directors at Mermec. “For us, 2021 will be an important year full of news, with the signing of strategic agreements and product developments that will allow us to grow steadily in the international market.”

One of these agreements is signing up Swedish Voi Technology, which will use the e-bikes to differentiate its e-scooter sharing service in the U.K. Vaimoo has already been launched through Voi Technology in Copenhagen and Rotterdam.