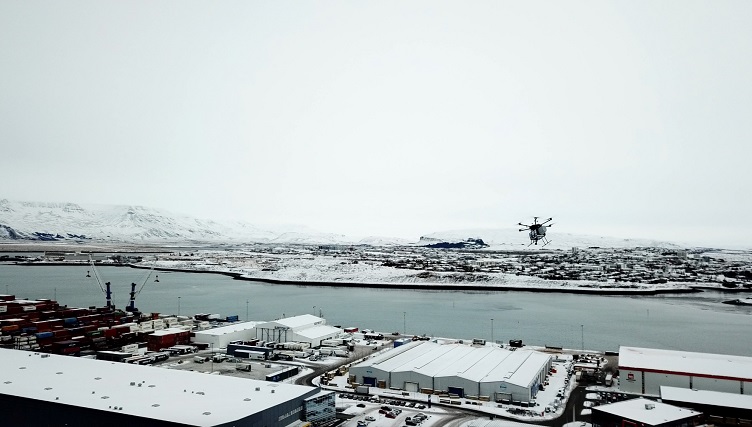 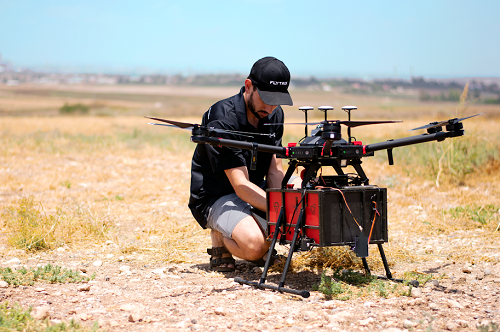 A worker readies a drone for a delivery run. Source: Flytrex

Drone delivery is seen as the next step in improving last-mile logistics.

Because of this new opportunity emerging in a multi-billion dollar market, numerous startups as well as all major delivery brands have begun work to develop their own solutions. Some of these projects deal with the delivery of medical goods from a hospital or pharmacy straight to the home. Or they deal with package delivery from e-commerce sites or even food delivery from grocery stores or the local burger shop.

In just a few years, the market for drone delivery has exploded as many of these companies have expanded testing of drones worldwide. In the U.S., testing has intensified in many regions as the Federal Aviation Administration (FAA) has opened up new testing locations for drone delivery.

Flytrex has been a part of a pilot program in North Carolina run by the FAA. The company has received the FAA’s approval to begin operations, but these operations have not begun yet. It was one of a handful of companies testing the viability of drone deliveries in the state. The company has also fully operational systems for drone delivery in Iceland and North Dakota.

Yariv Bash, CEO and co-founder of Flytrex, sat down with Electronics360 to discuss how to proliferate the market for drone delivery as well as the challenges facing the technology that are still in place.

Recently you were given approval by the FAA to begin deliveries in North Carolina. Tell us a little about how this works and how is that working out?

Bash: At the beginning of 2019, Flytrex was selected by the FAA to participate in its UAS Integration Pilot Program (IPP), where state and local governments work together with drone operators and manufacturers to accelerate safe drone integration. Following Flytrex’s acceptance to the program, the company received an expedited priority status with the FAA, which significantly reduces the time Flytrex and its partners must wait to receive all the necessary permits — a process that could otherwise take up to two years.

This eventually led to our most recent accomplishment — receiving the FAA’s approval to fly drones across highways, one of the first of its kind to be granted by the FAA to a civilian company. We expect operations to kick off in the next few months.

Do you plan to expand testing of drone deliveries in the future in North Carolina?

Bash: We are happy to expand drone delivery to any community that can benefit from it. Once we begin operations in North Carolina, we will consider our next steps — i.e. expanding to offer backyard deliveries and add additional routes — all of which would require testing and regulatory approval before launch.

What do you think are the major issues that face drone delivery proliferation?

Bash: As with any company blazing a new path, we overcome obstacles on a daily basis. One of the greatest challenges for a company like ours has been getting buy-in from regulators and society alike. That is why it has always been an integral part of our mission to work hand in hand not only with regulators to ensure that we incorporate the highest safety standards, but also with local communities, who have legitimate concerns about safety, privacy and other matters.

Obviously, there are a number of companies working on drone deliveries, how does Flytrex see itself differentiating from the pack including some of the bigger companies in the market like Google’s Wing, Amazon and others?

Bash: Flytrex’s agility as a startup is what ultimately makes us so unique in the growing space. By working with local partners, startups like us are able to home in on customers’ needs — on both the consumer and retail sides. Our versatility also enables us to help eCommerce businesses large, medium and small compete with the online retail giants. By disrupting the traditional delivery space with more efficient, cost-cutting and sustainable on-demand alternatives, local communities are better served.

You previously had pilot projects in Iceland as well as at a golf course in North Dakota. Are those still active? Do you plan to expand these types of projects?

Bash: The pilot programs eventually became the fully operational systems that they are now. Flytrex’s fully operational system in Reykjavik, Iceland, has been delivering orders successfully since our 2017 launch, and our service at Kings Walk Golf Course in North Dakota has similarly been up and running since 2018. We’ve even improved on our Iceland system – expanding our service in 2018 to include 13 new routes and the addition of Flytrex’s patented “In-Air” wire-drop system that safely lowers the payload down to the consumer from a wire that retracts upon release. In the future, we would like to expand our operations to other states in the U.S. and other countries as well.

What time frame do you see drone deliveries becoming commonplace, it seems things are accelerating quite a bit recently.

Bash: Once regulations kick in, drone deliveries will explode. We believe they will become commonplace within five years.