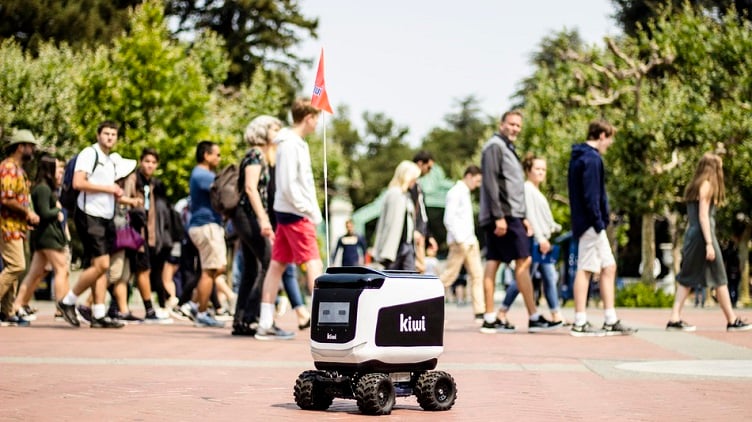 A KiwiBot on the streets of Berkeley, Calif. Source: Kiwi

While still in its infancy, the market for autonomous delivery robots is growing rapidly. A number of startups are rolling out pilot projects around the world with small, autonomous cargo containers delivering goods and food to consumers in cities and other local municipalities.

For all the promise of new technology, it only takes one mistake to cause a tremendous setback for a company or an emerging device or application.

Look at what happened with Uber after its self-driving vehicle killed a pedestrian in Arizona earlier this year. The company halted testing of its technology shortly afterward and then a few months later decided to lay off 100 safety drivers — those that ride in the vehicles to monitor their operation. Nearly nine months later, the company is continuing to struggle to get back on track with its self-driving program amid reports that the accident could have been avoided. Just last month, the company decided to re-start the pilot program.

While not even close to as extreme as a civilian death, an autonomous food delivery robot from startup Kiwi burst into flames on the campus of the University of California, Berkeley. No one was harmed in the incident and the fire was extinguished by a person on campus before the fire department arrived.

Kiwi, which runs about 100 delivery KiwiBots in Berkeley, California, issued a statement suggesting that the problem was due to human error. The robot’s battery was replaced with a defective part instead of a functioning one. This caused the battery to overheat and catch fire, Kiwi said.

This is extremely similar to what happened with Samsung’s Galaxy Note 7, which in early 2017 had numerous problems with the device overheating and, in some cases, catching fire due to the lithium-ion batteries short-circuiting inside the smartphone. Later, the U.S. Department of Transportation banned the phones from all U.S. aircraft labeling them a “forbidden hazardous material.”

This probably will not happen to the KiwiBots, but the incident might be cause for concern for those startups and other vendors that are currently developing autonomous delivery robots. These include Starship, which also has an ongoing delivery pilot project in the San Francisco Bay Area, and Robby Technologies that debuted at CES 2018 with its autonomous delivery robot Robby 2. Delivery vendor Postmates is also testing a new robot called Serve that is powered by an Nvidia Xavier processor and can carry 50 pounds and travel 30 miles on a single charge.

The good news is that Americans are very open to the idea of having robots deliver goods to them and the outlook for this delivery method, along with delivery drones and autonomous vehicle delivery, seems very bright.