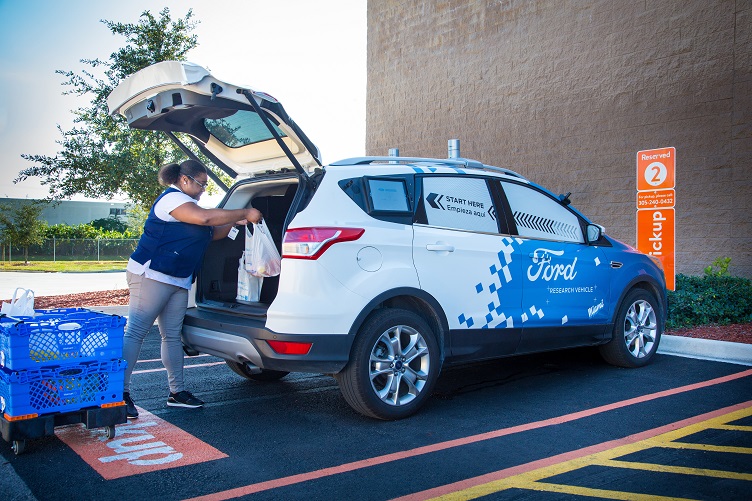 Walmart will use Ford autonomous vehicles and Postmates to deliver goods and food to consumers. Source: Ford

Self-driving cars are being billed as the next great revolution in the automotive space, opening up the potential for generating a tremendous amount of new money from on-demand ride-hailing or car-sharing services as well as expanding last-mile logistics and food and goods delivery.

Not surprisingly, numerous companies are already jumping on board even before the first self-driving vehicles have gotten on the road. Start-up AutoX in California’s Bay Area has started a delivery service pilot program by partnering with GrubMarket.com. Another project from Ocado Technology is using driverless Cargo Pods to transport cargo and food throughout the streets of London. Grocery store chain Kroger has also gotten in on the act with an agreement with Nuro for a pilot food delivery project in Arizona.

Recently, Renault and IKEA both unveiled their plans for using self-driving cars and vans in order to bring about a new way of getting goods into the hands of consumers that is faster and easier.

Ford Motors and Postmates have teamed up for a pilot project in Miami and Miami Beach to deliver food via autonomous vehicle where consumers would unlock the goods through a smartphone. Now, the duo is expanding the project to include goods from Walmart in a new collaboration that will explore how autonomous vehicles can complement Walmart’s existing delivery offerings.

Walmart is currently using Postmates and other delivery networks in order to bring groceries to consumers and by the end of this year, the option will be available in 800 Walmart stores across 100 cities in the U.S. Next year, the number of stores offering delivery service will double, Ford said.

The pilot project will not just expand how consumers are able to get goods and food from Walmart, but will also be a test of the role self-driving cars will play in this delivery option. Ford said it will use the project to gather data about consumer preferences and learn the best way to connect people with the goods they desire or need.

Ford will spend the next few months looking at its operations and identifying what goods can be feasibly transported and finding any issues that may need to be addressed in order to successfully deliver orders using self-driving vehicles. Ford said it will explore different vehicle configurations and modifications that will meet consumer needs and establish scenarios for the vehicles that would make multiple deliveries in a single trip.