A New Look at Smart Glasses 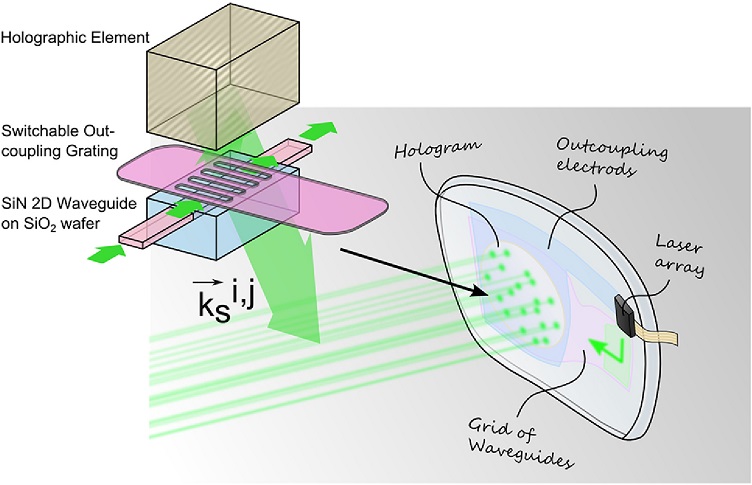 Illustration of the see-through display device with a zoom on one emissive point element. Source: Optical Society of America.

A new approach by researchers in France could make smart glasses nearly indistinguishable from traditional glasses. The design uses a retinal projection-display concept, projecting images from the glasses directly into the eye to display information, such as directions or restaurant ratings.

“We started with the idea that smart glasses should look and feel like normal glasses," said research team leader Christopher Martinez of the Laboratoire D'électronique des Technologies de l'information (CEA-Leti). "We eliminated the bulky optical components typically required, and instead use the eye itself to form the image."

That is to say, the design projects individual pixels that the brain can put together to form letters and words.

"We don't bring an image to the surface of the glass, but instead bring information that is emitted in the form of photons to make the image in the eye," Martinez explained.

According to the design concept, those photons would be guided from a laser or other light source into a holographic optical element created within the lens of the glasses. Such elements can be made in light-sensitive plastics, as can be seen in the hologram-based security used in credit cards.

While glasses using the new approach wouldn't be useful for showing videos, they could provide information in the form of text or simple icons. The approach could also be useful for people with vision problems.

"The disturbance present in the eye could be integrated into the projection, giving visually impaired people a way to see information such as text,” Martinez said.

The researchers say that the concept is an important example of the new opportunities for retinal projection now possible thanks to recent developments in integrated photonics, which have moved from applications using telecommunication wavelengths into visible wavelengths that can be used in displays.

As presented in their research, which appears in the Optical Society journal Optica, positive results have already been reported from initial optical simulations. The next step for the researchers will be making and testing individual components before creating a working prototype.