When someone loses an arm they not only loose the appendage, but the sense of touch that goes along with it. Even if the body part is replaced with a prosthetic, that sense of feeling doesn't return. But new reearch may change that.

University of Illinois researchers have developed a new prosthetic arm that stimulates nerves with mild electrical feedback that gives users the sense of touch. The researchers developed an algorithm that regulates current, providing the user with a steady sensation. 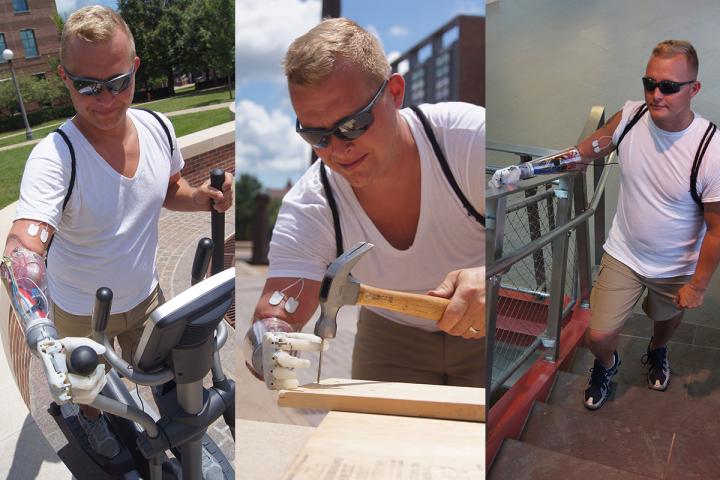 "We're giving sensation back to someone who's lost their hand. The idea is that we no longer want the prosthetic hand to feel like a tool, we want it to feel like an extension of the body," said Aadeel Akhtar, an M.D./Ph.D. student in the neuroscience program and the medical scholars program at the University of Illinois. "Commercial prosthetics don't have good sensory feedback. This is a step toward getting reliable sensory feedback to users of prosthetics.

The new prosthetic arms have sensors in the fingertips, so when the user touches something, an electrical signal that matches the pressure applied is sent to the skin, providing the user with the sense of touch.

While this development is huge for the prosthetics world, there have been issues in providing reliable feedback. With wear and tear over time, the electrodes that are connected to the skin start to peel off, which causes the build-up of electrical current on the sensors that are still attached, causing painful shocks. Sweat can also be an issue with the electrodes because of it and interfere with the electrode and the skin, causing little to no feedback.

The researchers developed a controller that monitors the feedback that the patient is experiencing; automatically adjusting to any issues so the user feels steady feedback. The controller was tested on two patient volunteers, who performed a test where the electrodes were peeled back over time. The control module was proven to reduce the electrical current when the electrodes were peeled back and provided steady feedback. The patients performed everyday tasks that could produce sweat, therefore producing lowered sensation from the sensors.

Adding a controlled simulation module to the sensory prosthetics could cost less than replacing the prosthetic.

"Although we don't know yet the exact breakdown of costs, our goal is to have it be completely covered by insurance at no out-of-pocket costs to users,” said Akhtar.

The researchers are working on making the module smaller so that it can fit inside the prosthetic arm instead of having to be mounted on the outside. They also want to do more extensive testing so they can confirm their results.

"Once we get a miniaturized stimulator, we plan on doing more patient testing where they can take it home for an extended period of time and we can evaluate how it feels as they perform activities of daily living. We want our users to be able to reliably feel and hold things as delicate as a child's hand," Akhtar said. "This is a step toward making a prosthetic hand that becomes an extension of the body rather than just being another tool."

The paper on the development of the new prosthetic arm was published in Science Robotics.