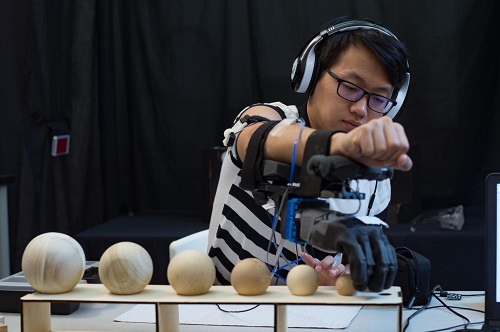 Test subjects were more than twice as likely to correctly guess the size of an object with a prosthetic hand when they received haptic feedback. (Source: Rice University)Haptic feedback has long been thought of as a way to improve how prosthetics interact with amputees, but now a group of researchers from Rice University have figured out a way to use haptics to add “muscle sense” to artificial limbs that allow users to more easily grab and identify objects.

Researchers used blindfolded test subjects and found that they were to discern the size of objects grasped with a prosthetic hand with haptic feedback more than double that of a simple skin-stretch device on the upper arm.

“Humans have an innate sense of how the parts of their bodies are positioned, even if they can't see them,” says Marcia O'Malley, professor of mechanical engineering at Rice. “This 'muscle sense' is what allows people to type on a keyboard, hold a cup, throw a ball, use a brake pedal and do countless other daily tasks.”

Traditional prostheses restore some day-to-day function, but very few provide sensory feedback. The Rice study is the first to test a prosthesis in combination with a skin-stretch rocking device for proprioception, the scientific term for muscle sense.

Rice researchers, along with research groups from the University of Pisa and the Italian Institute of Technology (IIT), were able to use improved computer processors, inexpensive sensors, vibrating motors from cellphones and other electronics to bring new possibilities for haptic feedback to prosthetics.

While some proprioceptive technologies require surgically implanted electrodes, the Rice haptic device is a noninvasive user interface with a rotating arm that brushes a soft rubber pad over the skin of the arm. At rest, the prosthetic hand is fully open, the rocker arm does not stretch the skin but as the hand closes, the arm rotates and the more the hand closes, the greater the skin is stretched.

"We're using the tactile sensation on the skin as a replacement for information the brain would normally get from the muscles about hand position," says Janelle Clark, a Rice graduate student working on the project. "We're essentially mapping from feedback from one source onto an aspect of the prosthetic hand. In this case, it's how much the hand is open or closed."

In the blindfold test, subjects were asked to grasp two different objects and then determine which one was larger. Without haptic feedback, the subjects had to base their guesses on intuition, resulting in a correct guess about 33 percent of the time. When they performed the same test with feedback from the Rice device, the subjects correctly identified the larger object 70 percent of the time.

The next steps are to test the device to see if amputees get a similar benefit from using the haptic prosthetic.

The full research report can be found on the Rice University web site.