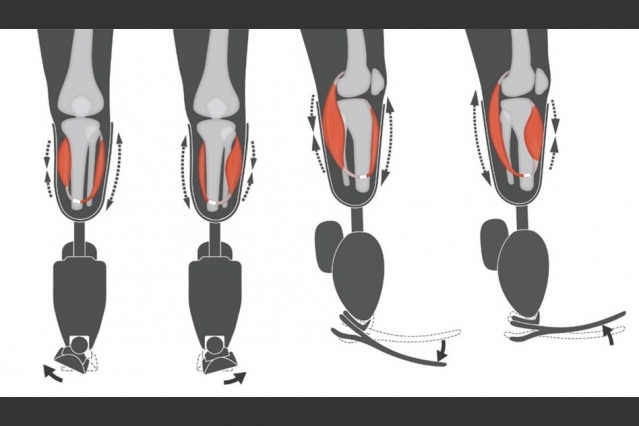 Two agonist-antagonist myoneural interface devices (AMIs) were surgically created in the patient’s residual limb: One was electrically linked to the robotic ankle joint, and the other to the robotic subtalar joint. Source: MIT Media Lab

Proprioception has been difficult to recreate with prosthetic limbs because it involves signals between the nerves in the limb and the brain. Accurate movement control in artificial limbs is limited due to the lack of proprioception. The research team has found a way to fix this problem.

Their novel neural interface and communication paradigm that restores proprioception in artificial limbs is called agonist-antagonist myoneural interface (AMI). The AMI can send movement commands from prosthetic wearer's central nervous system to the robotic prosthetic. The interface sends proprioceptive feedback, describing the movements the joints need to make back and forth between the prosthetic and the central nervous system. The system is implemented during the limb amputation surgery. During the surgery, the dynamic muscle relationships that develop in the human limb are preserved and then implemented in the artificial limb.

The research team used biological sensors to re-create the body’s natural proprioceptive sensations that are in the limb before the amputation. The AMI system has two opposing “muscle” tendons: the agonist and the antagonist. When one of these tendons shortens and contracts, the other tendon stretches, and vice versa. These movements allow the natural biological sensors that are in the muscle tendons to transmit electrical signals to the central nervous system in the body. The electrical signals communicate muscle length, speed and force information about the limb movements, basically the proprioception. The artificial arm’s electrical signals are then interpreted by the brain just like natural joint proprioception in human joints.

"Because the muscles have a natural nerve supply, when this agonist-antagonist muscle movement occurs information is sent through the nerve to the brain, enabling the person to feel those muscles moving, both their position, speed and load. When a person is thinking about moving their phantom ankle, the AMI that maps to that bionic ankle is moving back and forth, sending signals through the nerves to the brain, enabling the person with an amputation to actually feel their bionic ankle moving throughout the whole angular range," senior author and project director Hugh Herr, a professor of media arts and sciences at the MIT Media Lab says.

Decoding the electrical language of the nerves was the most difficult part of developing the AMI.

"Using this approach, rather than needing to speak that electrical language ourselves, we use these biological sensors to speak the language for us," Tyler Clites, first author of the paper and graduate student lead on the project, said. "These sensors translate mechanical stretch into electrical signals that can be interpreted by the brain as sensations of position, speed and force."

The next step for the research team was to test the system in real-life on humans. The system was implemented on a patient at Brigham and Women’s Faulkner Hospital in Boston. During a below-the-knee amputation, two AMIs were constructed and implemented. One of the AMIs was controlled by the prosthetic ankle joint and the other controlled by the prosthetic subtalar joint. The new prosthetic limb was built at MIT. It was electrically linked to the patient’s peripheral nervous system with electrodes that are on each AMI muscle after the surgery was performed.

"We knew that in order for us to validate the success of this new approach to amputation, we would need to couple the procedure with a novel prosthesis that could take advantage of the additional capabilities of this new type of residual limb," Matthew J Carty, MD, one of the paper's authors, a surgeon in the Division of Plastic and Reconstructive Surgery and an MIT research scientist, said. "Collaboration was critical, as the design of the procedure informed the design of the robotic limb, and vice versa."

The paper on the AMI system was published in Science Translational Medicine.