A Primer to the 6 Levels of Autonomous Driving 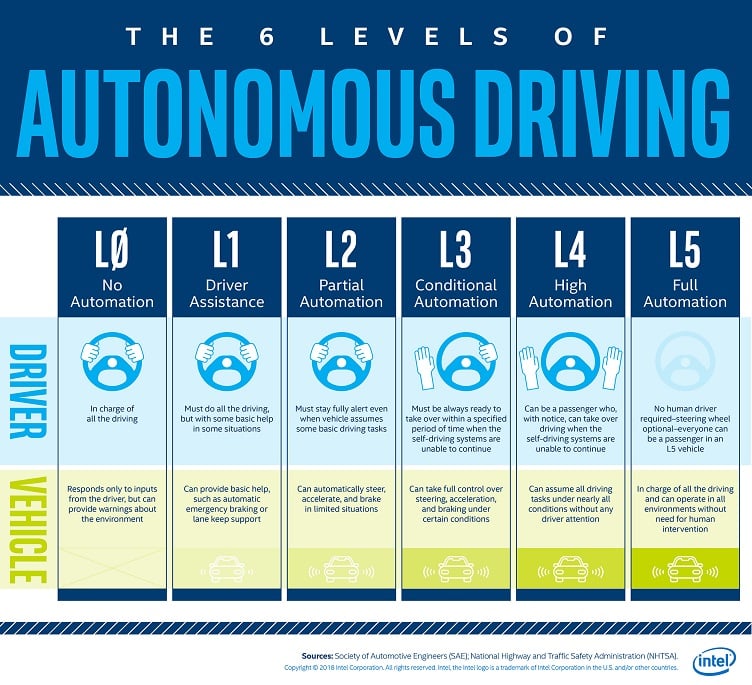 Autonomous driving is being billed as the next big thing in the automotive market with not just current car OEMs developing vehicles but a whole host of new startups and well-established companies emerging to take advantage of this game-changing technology.

Distinguishing between the different types of autonomous technology is challenging because there are six different tiers that explain what type of self-driving capabilities a car currently has or will have in the future. Vehicles are categorized according to what type of advanced driver assistance systems (ADAS) features they offer and what the Society of Automotive Engineers defines as the six levels of automation.

Luckily, Intel Corp. has broken down the levels of autonomy as they are defined.

Level 0 — This is zero autonomy where the driver performs all the driving but the vehicle can have blind spot detection, collision and lane departure warnings.

Level 1 — Is considered when a vehicle has some active ADAS features but the driver is still in charge. These features can include adaptive cruise control, automatic emergency braking and lane keeping.

Level 2 — This is considered partial automation where the driver still must be alert and monitor the environment but driving assist features control acceleration, braking and steering. They may also work together in unison so the driver does not need to provide any input. Some functions of Level 2 autonomy are available today, including self-parking and traffic jam assist.

Level 3 — Is when the vehicle can itself perform all aspects of the driving task under certain circumstances. Still, a human driver is required to take control at all times or drive the car itself.

Level 4 — This is where the car takes more control of the vehicle and is considered high automation. Here, the self-driving vehicle still has a driver’s seat and all the regular controls but the vehicle can drive and see all on its own, however, under certain circumstances such as geographic area, road conditions or local laws may require the human driver to take over.

Level 5 — Is considered fully autonomous where the car is capable of performing all driving functions under all environmental conditions and can operate without humans inside. There is no need for a steering wheel and drivers become passengers without ever needing to be involved in the driving aspect.