In order to undergo high-resolution imaging, cells must be sliced, diced, dehydrated, painted with toxic stains or embedded in resin.

If researchers can only view the inner workings of dead cells, they’re only seeing part of the story. They can’t monitor living cells’ dynamic real-time processes, like metabolic reactions or responses to diseases or treatments. 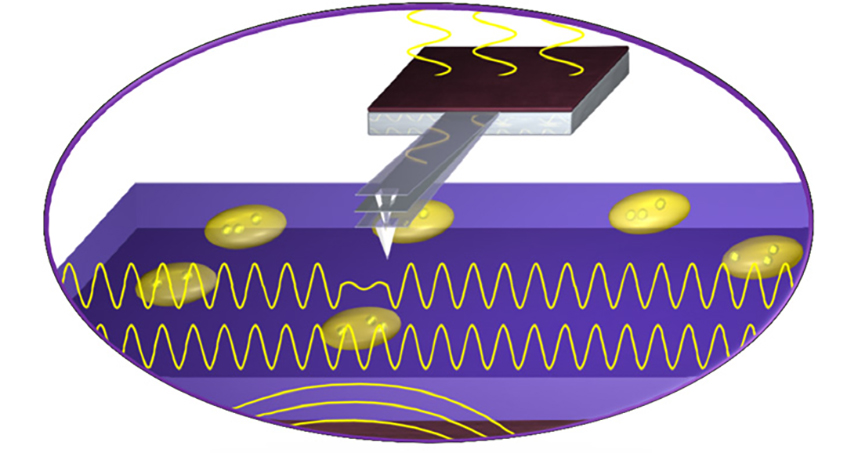 A schematic illustration of Shekhawat and Dravid's ultrasound probe (Northwestern)

"Sub-cellular components and structures have a profound influence on the behavior of the complex cellular machinery and systems biology," said Northwestern University's Gajendra Shekhawat. "However, unraveling the structures and components inside the cell is very challenging because they are so fragile."

Shekhawat and Vinayak P. Dravid, the Abraham Harris Professor of Materials Science and Engineering at Northwestern Engineering, have developed a novel, non-invasive imaging system that makes it possible to view the sub-cellular architecture of live cells at nanometer-scale resolution. The system is called Ultrasound Bioprobe; the technique combines ultrasound waves with atomic force microscopy, interacting with live cells to determine the changes in their mechanical behavior.

The research was supported by the National Science Foundation (NSF) and the National Heart, Lung and Blood Institute. Shekhawat and Dravid served as the paper’s co-corresponding authors. Shekhawat is a research associate professor in materials science and engineering.

Despite recent advances in imaging, there is currently no single method that provides high-resolution and high-sensitivity images of living sub-cellular structures. Fluorescent and confocal microscopy, which are traditional method for monitoring the biological interactions inside cells, suffer from poor spatial resolution and require invasive dyes or labels to enhance contrast and highlight structures within biological tissues. Light and acoustic wave imaging are unable to view structures smaller than a few hundred nanometers. Scanning proves microscopy can provide very high spatial resolution but can only identify surface structures rather than seeing inside the cell. While electron microscopy can view fine detail at the sub-cellular level, it's a destructive technique that cannot be used for living biological tissues.

"Many roadblocks have existed," said Dravid, who directs the NUANCE Center and the SHyNE Resource. "Characterization of the complex dynamics of biological processes, especially signal pathways at nanoscale resolution, has remained a challenge."

"Using this non-invasive approach, we can monitor real-time imaging of the nanomechanical changes in complex biological systems," Shekhawat said. "This could provide clues for early diagnostics and potential pathways for developing therapeutic strategies."

The team plans to expand its technique to diverse biomedical applications like the nanomechanics of soft tissues like skin, enamels and bones to prove their 3D architecture down to nanoscale spatial resolution.

"A significant variation in cellular nanostructures and mechanics can be directly influenced by the cancer conditions of a cell," Dravid said. "So Ultrasound Bioprobe could also expand our fundamental understanding of the nanomechanics at play within cancer cells."

A paper on this research was published in Science Advances.