Optical Ultrasound Machine Can Be Miniaturized and Used with MRI Machine

Researchers from University College in London have developed an ultrasound machine that is created completely out of optical components. The optical ultrasound imager uses optics, rather than electronics, to operate. It has improved performance and more flexibility for diagnosis and treatment of diseases. The new imager has high video-rate development and 2D real-time imaging of biological tissues. 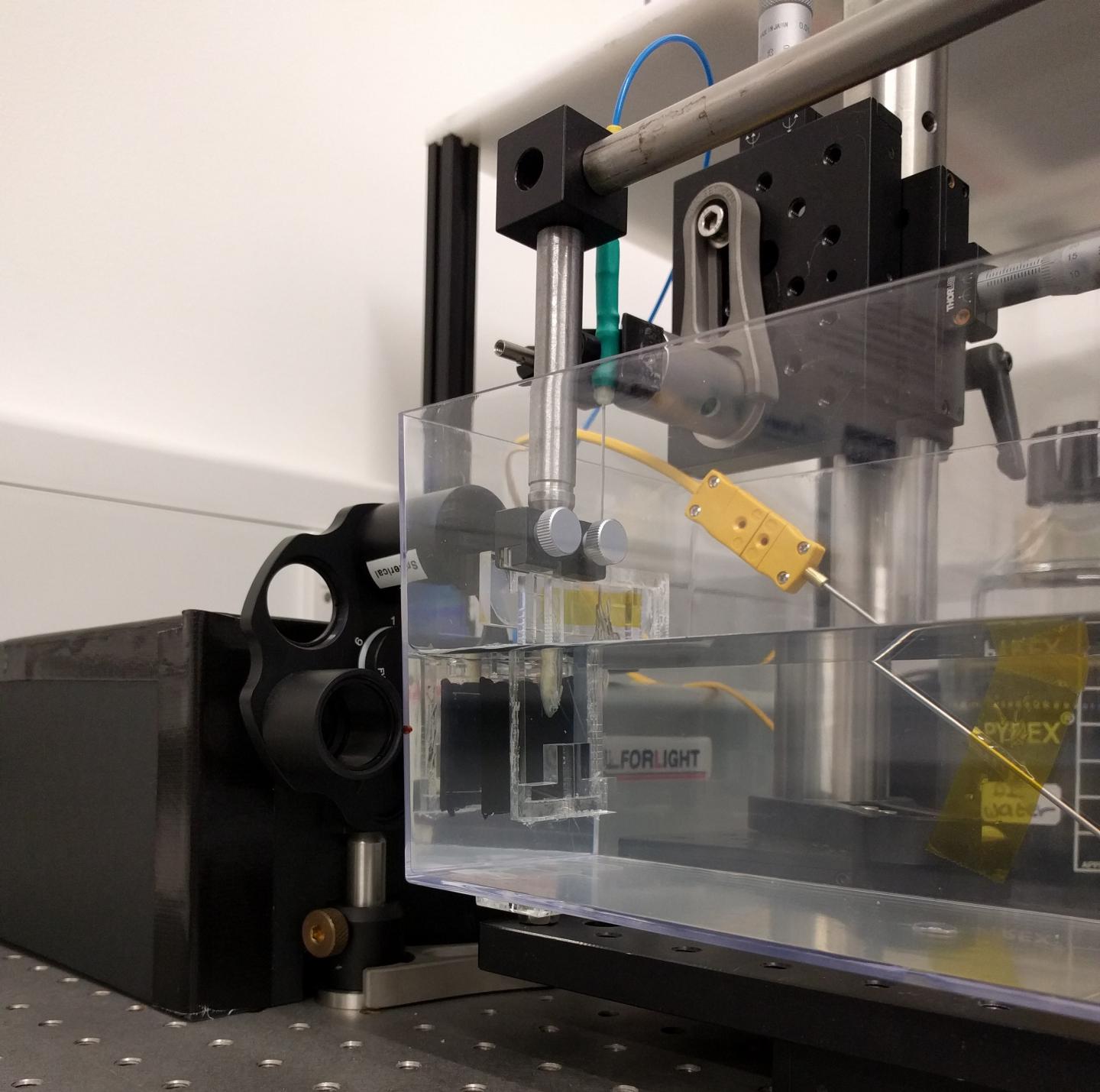 This prototype is the first all-optical ultrasound imager to demonstrate video-rate, real-time 2D imaging of biological tissue. The achievement is an important step toward making all-optical ultrasound practical for routine clinical use, where it could offer significant advantages over current imaging technology. (Source: Erwin J. Alles, University College London)

Because the ultrasound machine has optical components rather than electric, it can be used in the same room as an MRI machine without breaking or affecting the scanning. This provides a comprehensive picture of the tissues being scanned, like a tumor or blood vessel.

"All-optical ultrasound imaging probes have the potential to revolutionize image-guided interventions," said Erwin J. Alles, University College London, United Kingdom. "A lack of electronics and the resulting MRI compatibility will allow for true multimodality image guidance, with probes that are potentially just a fraction of the cost of conventional electronic counterparts."

The light beam scanning mirrors increase the quality of the images being produced. The system can develop images in many different modes easily. Doctors can toggle between modes in a single system. This would typically require multiple specialized probes with an electrical ultrasound machine.

"The flexibility offered by the scanning mirrors will allow for seamless switching between 2D and 3D imaging, as well as a dynamically adjustable trade-off between image resolution and penetration depth, without the need to swap imaging probes," said Alles. "Especially in a minimally invasive interventional setting, swapping imaging probes is highly disruptive, extends procedure times and introduces risks to the patient."

Conventional ultrasound systems have many electronic transducers that transmit high-frequency sound into tissues and receive the transmissions. A computer then constructs the images of the tissues for doctors to analyze.

On the other hand, the new all-optical ultrasound imager uses only light to transmit and receive ultrasound waves. The pulsed laser generates ultrasound waves. The systems have scanning mirrors that control where the waves are going to be transmitted. A fiber optic sensor receives the reflected waves and a computer creates the 2D image. The system acquires data from multiple source locations and then combines them to create a clear image. It is the first optical ultrasound system that can create and display images at video rates.

Conventional ultrasound devices are difficult to scale down. Typically these devices are large hand-held probes that a doctor places manually on the skin manually. Miniaturized versions of these devices are too expensive to be used daily in a clinical environment. The new optical ultrasound changes this. Optical components are easily scaled down while staying cheap.

The new system was tested by imaging a deceased zebrafish and a pig artery that was being manipulated to look as if it is pumping blood. The images created from this testing were at a comparable level to the electronic ultrasound system.

The optical ultrasound system has a sustained frame rate of 15 Hertz, a dynamic range of 30 decibels, a penetration rate of 6 millimeters with a resolution of 75 by 100 micrometers. Researchers are working on a long, flexible imaging probe for free-hand operation in clinical use and miniaturized versions for endoscopic applications.

The paper on the new system was published in Biomedical Optics Express.