Ben-Gurion University of the Negev (BGU) researchers have begun to discover preferences in human-robot interactions and the need to personalize those encounters to fit the human’s preferences and the designated task.

According to this new study, the researchers tested user preferences when interacting with a robot on a joint movement task as a first step toward developing an interactive movement protocol to be used in rehabilitation. 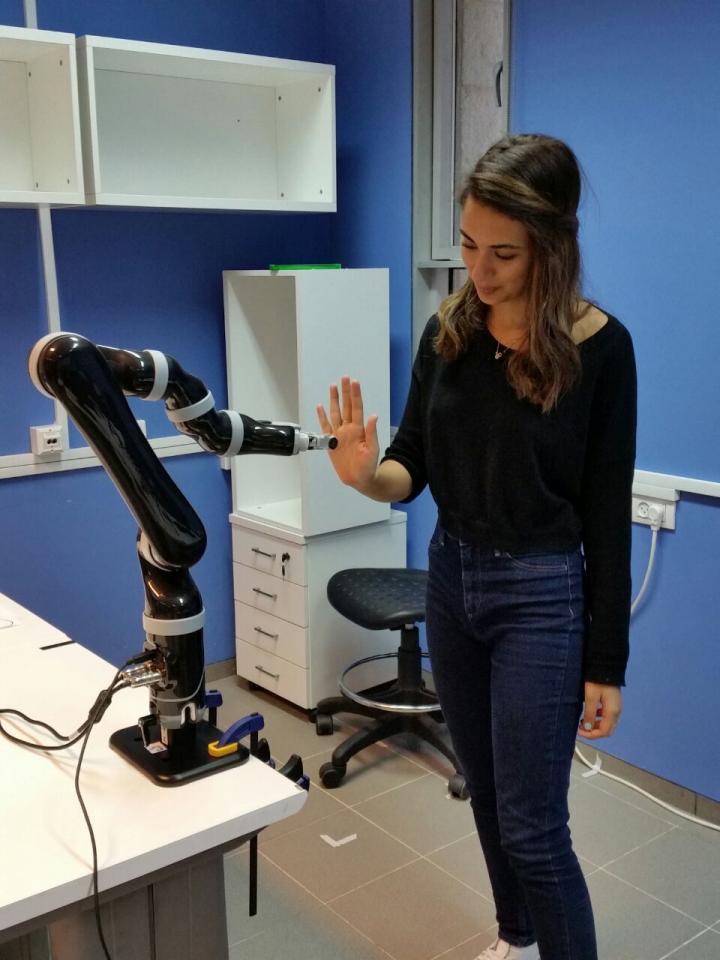 Ben-Gurion University of the Negev student researcher Shir Kashi interacts with robotic arm as part of her research in personalizing human-robot interactions to develop an interactive movement protocol for rehabilitation. (Ben-Gurion U. Israel)

Dr. Shelly Levy-Tzedek, head of the Cognition, Aging, and Rehabilitation Lab in BGU’s Department of Physical Therapy and a member of the University’s Zlotowski Center for Neuroscience, led this research. She focused on the use of robots for rehabilitation of patients. Many patients don’t practice their physical therapy routines enough or at all on their own at home, so Dr. Levy-Tzedek is designing a robot companion that encourages people to practice their routines and track their progress.

"In the future, human beings may increasingly rely on robotic assistance for daily tasks, and our research shows that the type of motions that the robot makes when interacting with humans makes a difference in how satisfied the person is with the interaction," says Dr. Levy-Tzedek. "People feel that if robots don't move like they do, it is unsettling and they will use them less frequently."

In the study, 22 college-age participants played a leader-follower mirror game with a robotic arm. The person and the robot took turns following each other’s joint movements. When the robotic arm was leading, it performed movements that were either sharp or smooth.

The study came to three main conclusions. First, the robotic movement primes the human movement. The person tends to imitate the movements of the robot. "This is a very important aspect to consider, for example, when designing a robotic nurse who assists a surgeon in the operating room," Dr. Levy-Tzedek says. "You wouldn't want a robotic nurse to make sharp 'robotic' movements that will affect the way the surgeon moves his or her hands during an operation."

Second, there was no clear-cut preference for leading or following the robot. Half the group preferred to lead the human-robot movement while half preferred to follow. "This finding highlights the importance of developing personalized human-robot interactions. Just as the field of medicine is moving toward customized medicine for each patient, the field of robotics needs to customize the pattern of interaction differently for each user” said Dr. Levy-Tzedek.

"Thus, determining the elements in the interaction that make users more motivated to continue is important in designing future robots that will interact with humans on a daily basis," says Levy-Tzedek.

The study was published in Restorative Neurology and Neuroscience.