Motorists often trade horror stories about the coldest, snowiest nights their starters failed due to a dead battery. Many would agree that they don’t think about their car’s battery until they hear that dreaded click when turning their ignition key. While most consumers opt for relatively inexpensive flooded lead-acid batteries, there are other types worth considering as well.

Car batteries are also known as SLI (starting-lighting-ignition) batteries. Their main function, as evidenced by the S and I in SLI, is starting the vehicle. Because a vehicle’s alternator powers its electrical systems while the engine is running, car batteries are designed to release a burst of current and then quickly recharge via the alternator. While the vehicle is running, the battery functions as a reserve power source in case the vehicle’s electrical requirements exceed the charging system’s capacity, and also as a stabilizer to even out voltage spikes. 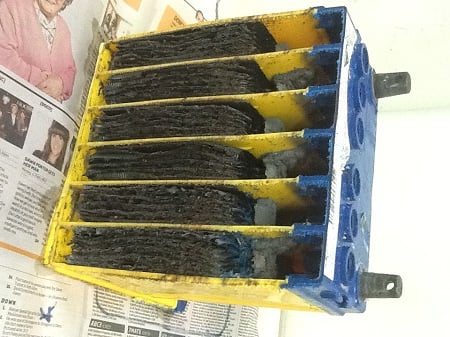 A cross-section of a lead acid battery. Source: Ben Cossalter / CC BY-SA 3.0Automotive batteries are not designed for deep discharging. A typical start drains less than three percent of a battery’s capacity. A deep discharge, which can occur when a vehicle’s lights or other electrical components are accidentally left on for a long period, can drastically reduce the battery’s life and capabilities.

Wet/flooded lead acid batteries are by far the most popular auto battery and typically cost between $80 and $200. This design uses six cells consisting of lead plates submerged in a sulfuric acid electrolytic solution. A chemical reaction in the cells causes an electron-releasing chemical reaction, and as the battery discharges the acidic electrolyte reacts with the lead plates, forming lead sulfate. Recharging the battery reverses this reaction, restoring a lead dioxide coating to the anode plates.

Wet lead acid batteries are economical and effective but are particularly susceptible to failure due to deep discharge. A single deep discharge coats the lead plate electrodes with sulfate deposits, reducing their effectiveness during future uses. The highly toxic and corrosive acid electrolyte can also leak as a result of extremely cold weather, overcharging or battery damage.

While lead acid batteries are widely accepted as car batteries, there are several other types that attempt to improve on their shortcomings.

Valve-regulated lead acid (VRLA) batteries are a subtype of lead acid battery with safeguards against electrolyte leakage and cost between $120 and $250. They contain integral pressurized safety valves that contain the gas in the battery and stop fluid loss. Gel-type VRLA batteries integrate fumed silica into the electrolyte, making it gel-like to reduce electrolyte evaporation and spillage and to increase shock resistance. A second type, absorbent glass mat (AGM) batteries contain the electrolyte in glass mats rather than flooding the plates. This enables better self-discharging characteristics and reduces leakage. Quality AGM car batteries typically cost between $150 and $300. 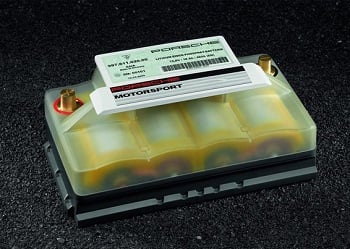 Porsche's lightweight lithium-ion starter battery. Source: PorscheLithium-ion batteries are rare as starter batteries, but certain high-performance or luxury cars employ them. In 2009 Porsche announced the first lithium-ion starter battery as an option on certain 2010 911 and Boxster sports cars. The battery offers several advantages over lead-acid ones. Weighing less than 13 pounds, the new battery is more than 22 pounds lighter than a conventional 60 Ah lead battery Because the lithium-ion battery’s electrolyte composition is independent of its charge status, it offers nearly 100 percent of its total capacity compared to 30 percent in a lead-acid type.

This specialized performance comes at a steep price, though: Porsche listed the option at $1,700 in 2009.

Some retail outlets and auto shops resell used car batteries for significantly less than new ones. As with buying any used item with a set end-of-life, this is a risky proposition.

Many used battery retailers claim to test batteries before reselling to ensure they still work. Even if the resellers did test the batteries, battery load testing is not always reliable and many bad batteries actually test as good. Conversely, though, many discarded batteries tested to be bad are actually good for more use, so a consumer could get lucky by retrieving a thrown-out battery assumed to be bad.

A major upside to buying new batteries is that they are usually under warranty. Battery manufacturers usually stand by their products and often offer a no-questions-asked free replacement, often up to three years or more post-purchase. While a $25 used battery beats a $100 new one, most motorists would gladly pay an extra $75 to avoid the likelihood of being stranded with a dead vehicle.