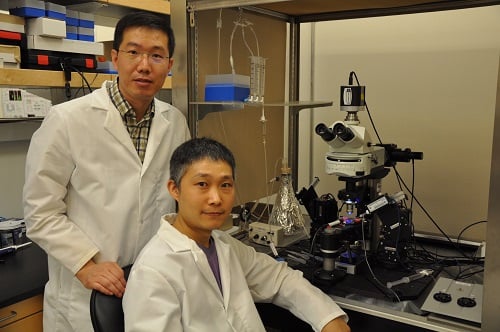 Researchers Jun-Hyeong Cho (left) and Woong Bin Kim in their lab. Source: UC Riverside Everyone has bad memories of events in life. Some are worse than others, especially for those that have suffered a traumatic event.

But what if those memories could be erased so you no longer have that fear response to a particular sight, sound or smell?

Researchers at the University of California, Riverside are working on a new method that removes fear memories by weakening the connections between the nerve cells involved in forming these memories.

To survive, animals develop a fear response to dangerous situations. But not all fear memories, such as PTSD, are beneficial for survival. Researchers found that fear memory can be manipulated in such a way that some beneficial memories are retained while others, detrimental to our daily life, are suppressed.

The research could lead to new ways to treat PTSD and specific phobias.

"In the brain, neurons communicate with each other through synaptic connections, in which signals from one neuron are transmitted to another neuron by means of neurotransmitters," says Jun-Hyeong Cho, assistant professor at UC Riverside. "We demonstrated that the formation of fear memory associated with a specific auditory cue involves selective strengthening in synaptic connections which convey the auditory signals to the amygdala, a brain area essential for fear learning and memory. We also demonstrated that selective weakening of the connections erased fear memory for the auditory cue."

Working with mice, researchers exposed the animals to two sounds: a high-pitch tone and a low-pitch tone. Neither produced a fear response. Then they paired the high-pitch tone with a mild footshock. Following this, the mice responded by ceasing movement, called freezing behavior. The mice still did not respond to the low-pitch sound.

The researchers then used a method called optogenetics to weaken the synaptic connection with light, which erased the fear memory for the high-pitch tone.

"In the brain, neurons receiving the high- and low-pitch tone signals are intermingled," Cho says. "We were able, however, to experimentally stimulate just those neurons that responded to the high-pitch sound. Using low-frequency stimulations with light, we were able to erase the fear memory by artificially weakening the connections conveying the signals of the sensory cue—a high-pitch tone in our experiments—that are associated with the aversive event, namely, the footshock."

The study expands how adaptive fear memory for a relevant stimulus is encoded in the brain and could be a way to selectively suppress pathological fear while preserving adaptive fear in PTSD, researchers say.

UC Riverside believes the method could also be used for other research such as reward learning, which researchers will be investigating to help possibly treat addictive behaviors.