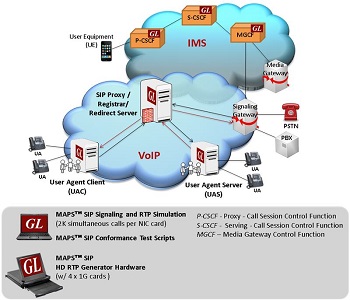 The company says the test suite is designed with 400+ test cases, as per SIP specification of ETSI TS 102 027-2 V3.1.1 (2004-11). Test cases include general messaging and call flow scenarios for multimedia call session setup and control over IP networks.

•Supports IPv4 /IPv6 and transport over UDP ,TCP, and TLS for secure transport

•With MAPS™ HD RTP network appliance up to 20,000 endpoints per unit can be easily achieved (requires PKS109 and specialized hardware)