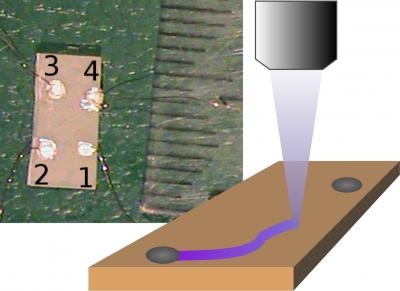 It’s kind of like an Etch A Sketch (Spin Master™, Toronto, Ontario, Canada).

That’s how WSU professor of physics and materials science Matt McCluskey refers to it, actually. McCluskey used a laser to etch a line into crystal; with electrical contacts at each end of the line, it carried a current.

The work serves as proof of concept for a phenomenon discovered accidentally by WSU researchers in 2013. At that time, a doctoral student found that a crystal, when heated and left exposed to light, possessed a 400% electrical conductivity increase. Under ordinary circumstances, a crystal would not conduct electricity.

The phenomenon is called "persistent photoconductivity" and it can persist long after the light is turned off. Previous work noted that the effect could be exploited for novel memory storage devices cooled with liquid nitrogen, as temperatures below 180° K were required. In McCluskey’s work with annealed strontium titanate crystals, however, the effect also occurs at room temperature.

But it’s the result that’s most important. The crystal’s conductivity was increased by 1000%—an effect that can last up to a year. The circuit can also be by erased by heating it on a hot plate; an optical pen can then be used to recast a new circuit.

“We've done it a few cycles,” adds McCluskey. “Another engineering challenge would be to do that thousands of times."

"It opens up a new type of electronics where you can define a circuit optically and then erase it and define a new one," added McCluskey. "It's exciting that it's reconfigurable. It's also transparent…it actually is invisible electronics."